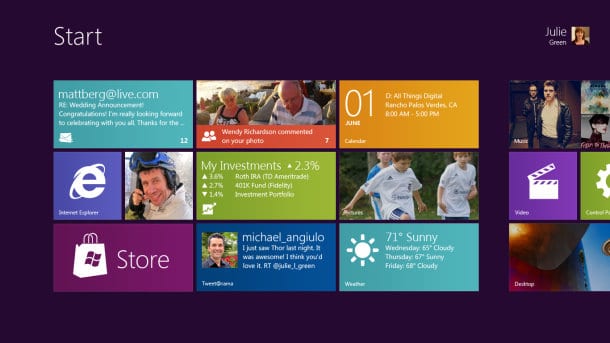 Microsoft is taking the wraps (at least officially) off Windows 8 this week at its BUILD developer conference in Anaheim. It’s big news to say the least, although the new OS is getting surprisingly little press or mentions — 252 articles on Google News vs. thousands for iOS 5 — relativeto its stature in the tech industry; Win 7 and its derivatives including servers and tools is a huge money-maker ($32B revenue in 2010). Along with XBOX360 ($14B) it’s the company’s bread and butter (and let’s not forget about something called Office). So anytime there is an upgrade, or new version, it’s — almost by default — big time news.

Once again, Redmond will likely play second fiddle to Cupertino. Apple is ratcheting up its marketing engine in anticipation of releasing iOS 5 for iPhone (and iPad). Sub-plot: will it cast as large a shadow over MSFT without the transcendent Steve Jobs?

But here’s the deal. I actually really like Windows 7. Yes, I’m willing to come out here publicly and say it. Gasps. Just like Planet of the Apes: defender of the faith!

Maybe it dates back to my days when Win ’95 hit the scene — remember, “Start Me Up!”? Or even back in the 80s when Win out-muscled the other earlier graphical user interfaced called GEM by Digital Research.

Win 7 is the graphical UI perfected… well, at least for the desktop PC era. It’s fast, stable. The taskbar (again, just an opinion here) is far better to use than the dock on Mac OS X which is finicky by comparison; not to mention OS X has a confusing bifurcation: menu at the top, dock at the bottom – in Win 7 it’s nicely integrated. I own a MacBook Pro and use it every day. It’s — as they say — a killer bit of kit. I love the screen, the keyboard, the build quality. But I’m less enamored with the OS. It’s not bad, it’s just that Windows is much more intuitive.

So with that backstory, I’ve been giving a lot of thought (well, not that much… after all I need to keep most of brain capacity loaded up with Android speak), and here’s 5 things I think Microsoft needs to do to get Windows 8 right (i.e. don’t screw up a good thing, but keep up with the Androids and iOSs of the world):

Unify the code base so it runs on both tablets and desktops.

Here’s a potential advantage for Microsoft. Apple is still in the process of rolling out its cloud service. Windows 8 should come built-in with cloud storage capability. It should also have an app store, with single click purchasing and the ability to run a virtual desktop that syncs across devices.

3. Media Center for the masses

From what I can tell Media Center will be missing from this week’s preview. When it does finally arrive let’s hope it’s simpler, easier-to-use. WMC is a bit of a secret weapon for Microsoft, but it’s typically only used by hardcore enthusiasts such as those who use it for custom home media servers. It could be an answer to iTunes, and Apple TV if done right. I use a PS3 with PS3 Media Server to stream 1080p movies and other content. It’s astonishingly good. But I would use WMC if it worked right.

4. Tone down the security alerts already!

It was really bad on Vista, and much improved on Win 7. But Microsoft needs to make these alerts and pop-ups less jarring. Sometimes, you know, we like to have fun on our tablets, PCs, smartphones. We’re not commandeering a miniature sub to the center of the earth. Is security important? Yes, of course. Please, though, don’t ratchet up the defcon alerts… I’m just trying to see how the 49ers did on Sunday.

We don’t need 20 variations of Win 8. Maybe the finance team does. Who doesn’t love a SKU or two? But to the consumer it’s unwieldy. Witness: Mac OS X Lion. A $29 upgrade via the Web. It was fast, easy – especially compared to the shrink wrap days.

Also: I wouldn’t complain if Silverlight died. Ditto .NET (although I don’t have a developer perspective on this framework).

Others will have more to add, and will have likely even played with leaked builds of the OS. There’s much to glean from those experiences across the Web.

Finally, it probably goes without saying: one Vista is probably one too many. Let’s all hope Win8 doesn’t suffer some kind of Star Trek even/odd syndrome.