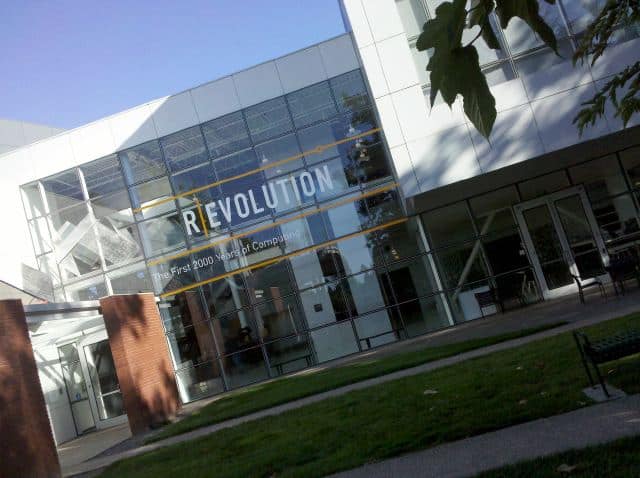 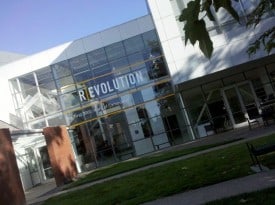 If I’m sounding a wee bit sensationalist it’s merely because throughout the 90-minute discussion there were the requisite deep dives into less contentious topics such as SEO, caching and indexing techniques. That all expected; and the packed house appeared to appreciate the rare look into some of the thought processes and engineering practices that drive Google. Here’s a company that — like Facebook that followed it — lives under a perpetual spotlight. It’s easy to forget this juggernaut is 15 years old now — hey, soon the “cool kids” will be old enough to drive… Teslas and Priuses (and pinwheel striped bicycles), no doubt.

And what evening in tech can be considered complete without at least one futuristic Star Trek reference? Google Voice, you had me at “Pa’nar Syndrome.”

The panel consisted of two Google Fellows, Ben Gomes and Amit Singhal, and a principal engineer Matt Cutts. The moderator was Danny Sullivan, Editor in Chief of SearchEngineLand.com. I got the sense that to many in the room these guys were veritable rock stars. Who knows, maybe some wanted their jobs (GOOG stock?). Or maybe some wanted to get a taste of life inside the Googleplex. Or perhaps, the pragmatic were looking for clues on how to increase their site’s page rank.

Listening to engineer Cutts describe how he created Safe Search (a way to make the search engine family friendly by filtering out adult content) I was reminded of a scene from the Michael Mann heist caper, Heat. Al Pacino realizes the tables are turned and suddenly he’s the one being watched by the very people he’s hunting. Likewise, while we’re all using Google search to look-up something, discover a place to eat, or learn why the leaves on the lemon tree (in our backyard) are turning yellow, the people inside Google are doing their very own searches, and, in Cutt’s case, looking for spammers and sinners. One challenge: drawing the line. Many low quality content farms, while not explicitly violating the hard fast rules that Google set forth, sit just outside that border. So it was back to the code – algorithms are revised, mathematical formulas revisited. Soon enough, that spam-tastical border grows just enough to ensnare the newly minted wicked (you may recall headlines earlier this year about Google’s crackdown via the Panda algorithm).

Oh, did you hear the one about the anti-Semitic link?

I found this pretty interesting. It made me question how well-suited technology is to handle hate crimes, or to influence cultural norms in general.

Here’s what happened. Somehow an anti-Semitic site had found its way to the top of the search results. This, as Google Fellow Amit Singhal emphatically reminds us, of course is against every value the company and employee stands for. So, then, comes the question, why not just black list them, delete the link!? Done!

Not so fast, there are pragmatic reasons the easy route is not taken, such as scale and resources. It’s just not realistic. But my suspicion is that co-founders Larry Page (now CEO) and Sergey Brin see the world as one big problem looking for the perfect algorithm. As a result, Singhal and team must fight hate with code. Later, we learn, all was right again when Google “reflected the Web” (and the world I suppose) in a new light, and the offending site had disappeared. I’m still not sure if it was us who changed, or Google that changed.

When I got home later that evening, I told my Little Loni the story. It was odd I said; it was as if a corner store was being robbed before our very eyes. So I urgently ask the Google Cop standing next to me to stop them, to do something. And he calmly suggests that I’m over-reacting, and the solution to the crime is to re-vamp our education system. 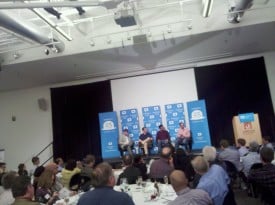 Amazingly, on this evening in a room of Googlers and Google watchers, it took about 53 minutes before Google Plus was finally mentioned. I was thankful for the momentary respite. Many have faulted former CEO Eric Schmidt for having a blind spot around social technology, allowing Facebook unfettered growth. That’s a bit harsh, though. While G+ is fast growing (25M users at last count), it’s still early. Time will tell whether consumers will embrace it, or burn-out from social networking fatigue. And, recall, under Schmidt’s leadership, Android was born, arguably the second biggest financial hit (after Adsense) the company has produced.

On social search, Amit explained that Google was working on folding in results from G+ into a born-again real-time search feature. But why would I write more about that when you can get the update from Ben Parr of Mashable (the 7/24 G+ news channel) who does a nice write up on that topic. One potential issue with that: unlike Twitter which limits updates to 140-characters and hence makes for perfectly digestible search results, G+ is typically being used for lengthy communications.

There you have it. Another compelling Churchill Club event. Sure, on this evening we didn’t get the ego of a Larry Ellison, the star-power of a James Cameron, or the salesmanship of a John Chambers. And that’s exactly what made it special. It was a panel of intelligent, forward-thinking, passionate people doing what they love, and inspiring those of us in the room. Put another way, it was another fine demonstration of the Silicon Valley way.

Author Matthew Schuchman (“How to Talk to Your Android”, “The Art of the Turnaround: How to Rescue Your Troubled Business from Creditors, Predators, and Competitors”). Fortunately I was able to sit next to Matthew and talk publishing and tech for a few minutes over dinner. He’s working on a new book about the future of smartphones and his research takes him to the valley every now and then. I did note that as part of his data gathering process he had a proclivity to interview only pretty, nubile Googlers. All in a day’s work. I have much to learn.