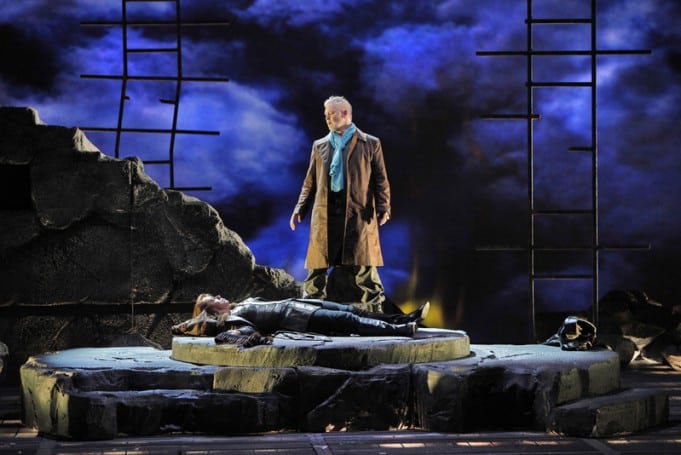 This is part 3 (Siegfried) of a four-part review series of The Ring of the Nibelung, one of the biggest stage presentations this year in the San Francisco Bay Area. The reviews for Part 1 (Das Rheingold) and Part 2 (Die Walküre) can be read here and here. Note that Lord of the Rings was also based on this material. 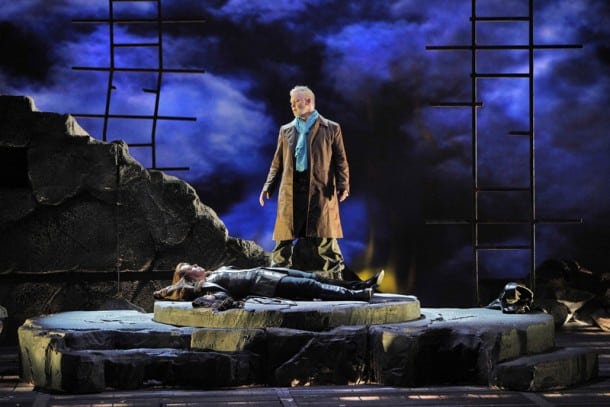 It began during Brünnhilde’s Awakening (Heil dir, Sonne!) and intensified through the “Ever did I” (Ewig war Ich, Ewig Bin Ich) duet that ended the four hour opera. Nearly everyone in the 3,146 seat house began inching forward with baited breath as all eyes were on the transformed Brünnhilde (Nina Stemme) and Siegfried (Jay Hunter Morris). Newly charged by the combined athleticm and artistry on stage, the audience got a second wind, stunned at what was taking place on stage. It seemed inconceivable these two could possibly sustain such excellence for such a protracted time. When the curtain came down, the place erupted in applause. Singers were entirely celebratory, swapping high fives during curtain calls. Had the house lights not come up,  folks would have clapped for another ten minutes. The good will was contagious, spilling into the street among the exhilarated crowd hurrying to catch the last BART train as they swapped notes, chatting with strangers as if after some spectacular social event, acknowledging “we made it!”

But as usual, I’m ahead of myself. Critics have noted that while Die Walküre is the darkest of the Ring Cycle, Seigfried is the lightest. Of course, “lightest” in this context means laughing at how the water sprays off of Mime’s head after Siegfried forcibly dunks it in a rusting tub as he demands information. However, after the grimness of Die Walküre, this passes for high humor.

More than anything, Siegfried is about transformation. Wotan (Mark Delavan) is transformed from the head honcho of Valhalla Inc. into the Wanderer. If Delavan was stunning in Die Walküre, he’s even more so in Siegfried, bringing with a new richness, depth and resonance to the role that just wasn’t called for during most of Die Walküre. It’s one thing to be the corporate boss and grieving parent and another to embody true majesty while doing so. Siegfried is transformed from a petulant, cross-legged child sitting on the ground to a man who ultimately gets the ring, the tarnhelm and the girl. This is a nearly impossible role, demanding vocal pyrotechnics that just didn’t end for the entire four hours. Morris’s voice just didn’t give out. Brünnhilde is transformed by the love of Siegfried, appreciating the cost of her decision.

We know that nothing good will come from Wotan’s letting Seigfried shatter his spear. After all, this is Wagner. Jim Morrison’s “Five to one, baby. One in five….” resonates. However, for a moment the price of that act is withheld, allowing Seigfried and Brünnhilde – and the audience – a much deserved moment of triumph.

Director Francesca Zambello’s modernist vision continues, with the grimness of urban werewolf country evident in Mime’s trashed trailer and Fafner’s mechanistic dragon. There’s much to say about this TS Eliot wasteland, as it comports well with Wagner’s own politics. Theodor Adorno explains that the Ring “is a metaphor of the totality of world history” which perfects itself by achieving consciousness” of which is has been from time immemorial. In light of Adorno’s take on Wagner,  Zambello’s modernist take is well placed, tying the material so that it is ever new, taking in more and more of the world history that it speaks to.

It’s good to have a day off from the Ring.  While worlds may be destroyed tomorrow, we can continue to mull over the stunning events of Friday night.