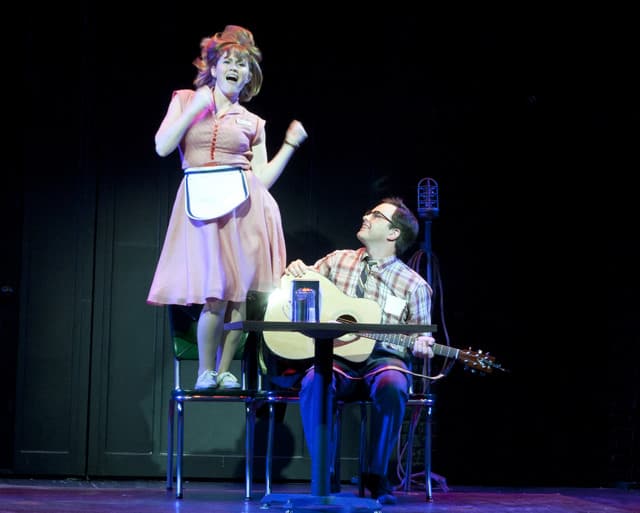 What happens when time stands still?

If the musical is to undergo a makeover, to re-emerge ready to entertain a new generation of theater-goer, I hope it looks a lot like Fly By Night. The rock musical opened over the weekend at TheatreWorks Silicon Valley (in Palo Alto) and deserves to keep the Lucie Stern Theater jammed to the rafters for the rest of its run.

And if it feels somewhat innovative, like so many start-ups around these parts, that’s probably because its development took place in the playwright’s equivalent of a garage: TheatreWorks’ New Works Festival. Fortunately the material (co-written by Kim Rosenstock, Will Connolly and Michael Mitnick), even at that early stage last year, grabbed the attention of audiences. It was workshopped, honed, and what we have now is a stunning world premiere.

The story centers around the great Northeast blackout of 1965. Harold (Ian Leonard) is a simple guy. He works at a deli (“Mayonnaise, Meat, Cheese and Lettuce!”), carries his guitar wherever he goes, and could even be a bit of a Buddy Holly as we discover during an open mic night at a local lounge. The girl of his dreams might be Broadway bound Daphne (Rachel Spencer Hewitt) from South Dakota, or star-gazing dreamer Miriam (Kristin Stokes) who is perhaps the most bionic waitress in the history of greasy spoons.

It is a triangle within a circle, as we are told by the Narrator (Wade McCollum) who occupies the stage for the entirety of the show. Early on there is darkness – Harold and his father (James Judy) are dealing with loss. Each has their own way of grieving, though music is a common bond. There is light too — gorgeous and mesmerizing thanks to Paul Toben’s design.

And the music! It’s fresh, original, catchy (will I ever be able to get that melody out of my head?). Better still, it’s well integrated into the script. There are no jarring cuts between a scene and a song, like we see in so many tired, mainstream musicals. Instead there is a poetic-like elegance to the way numbers build, flowing easily from dialog to song, and back again.

Call it the anti-musical.

Perhaps the best part of Fly By Night is that it’s anything but cliche. Thankfully we don’t see a large ensemble blitz the stage with jumping jacks and cartwheels, wailing at full volume with kitschy pearly-whites. Nor do we get stereotypical, cardboard-thin musical characters. Instead, there is underlying complexity to each of these wandering souls. A bright smile and happy dance is not enough to propel the storyline. Likewise the ending goes against the flow, and the show is the better for it. We need more of this.

As for the performances, this could be one of the best cast musicals I’ve seen in a long time. Across the board, stellar. In particular, Wade McCollum as the narrator ties the entire show together with a highly skilled demonstration of timing, nuance. At one moment he narrates, the next he quickly jumps into character — as a mother, a gypsy, a ticket agent… the list is long, and as varied as the accents and physical traits he brings to each personality.

James Judy delivers the night’s most touching moment with “Cecily Smith,” an ode to his late wife, followed by a strolling one-man opera across the streets of Brooklyn.

Ian Leonard as the slightly awkward, likable lead, ratchets up the energy with a catchy opening number “Circles in the Sand” that sets the pace.

The onstage band (Michael Pettry, Artie Storch, Jeff Massanari, David Shoenbrun) is equal to the task and anchors the proceedings with aplomb. Often I find the drums clumsy and the bass loose in these types of shows where the band shares the stage — in this case, in a small room, rear stage right — with the performers. Not so here. It’s also worth noting that the band is equally effective during quieter moments (“Missing What I Never Had”) as it is when belting out some of the more powerful numbers (“The Prophecy”).

Not everything is perfect, mind you, but my complaints are minor. At well over two hours, it runs a tad long. In particular some scenes and dialog seem somewhat repetitive in an effort to support several of the themes. Also, the chorus and the humming of that catchy melody are used once too often. But this is me reaching deep, because ultimately, it’s a triumphant affair.

Playwright Kim Rosenstock has taken the Bay Area by … storm. Tigers Be Still, a dark comedy she penned, recently played SF Playhouse. And now she’s applied her many talents to the season opener at TheatreWorks. I liked the former well enough, but this musical is leaps and bounds more potent. My memory: seared.

Sitting through Fly By Night I was slightly in awe of the quality of the entire production. I’m probably not alone in thinking this isn’t the last we’ve heard of Rosenstock.