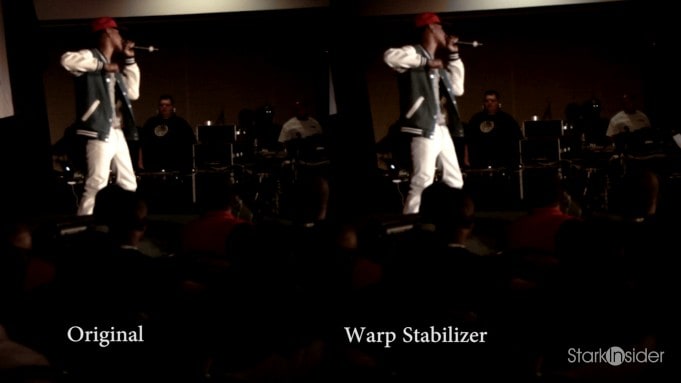 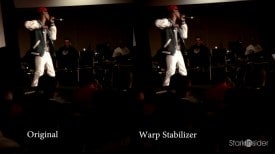 One of the features in Adobe CS 5.5 I was most looking forward to has arrived. It’s called “Warp Stabilizer” and is included in the stable of effects bundled with the epic After Effects. It’s a fancy name for what is essentially image stabilization.

I was anxious to find out how effective the effect is, and tried it out on some recent footage we captured at a fashion show concert last week in San Francisco. If you want the quick results, just play this video and judge for yourself; behold the 14 year-old rapper!

The short of it: awesome.

Warp Stabilizer took this previously unusable footage, and made it workable. Not that I’ll use it as you see here, but at least there is hope for this short clip. I was simply walking with the Canon T2i parallel to the stage, knowing that if I stabilization succeeded it might even look like a somewhat basic tracking shot of sorts. In this case you could call it the “rapper stabilizer.”

I realize that AE had this capability before. I experimented with the feature in CS4 a few years back on old footage we shot in front of the grape crusher in Napa (see below). But back then there was no preset that made it virtually a one click function. Instead, you had to manually chose an object in the frame to key on, then adjust scale and other variables to ensure the shot turned out right.

With CS 5.5 you don’t need to spend an inordinate amount of time fiddling with options in a convoluted multi-step process. Now, it’s a bit of magic really.

There are some options you can select, and when you’re ready you click “analyze” and the clip is stabilized. This took a few minutes on our old quad core. The clip is automatically linked back to Premiere Pro (if you so chose).

There are some down sides to stabilizing, all minor in my estimation. One is scale. You will lose some framing since the stabilizer dynamically makes adjustments which impact part of the live area. Also, the effect can introduce some “jelly” distortion to the image from what I’ve read. But, all things considered, this is a heck of an option to use on footage that would otherwise hit the floor.