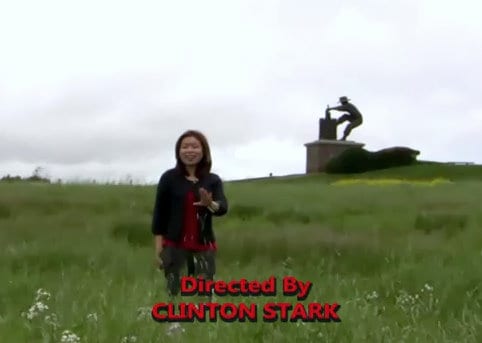 To put it in humbling perspective, we’re still about 129,000,000 (yes that’s millions) views short of the “success” that Rebecca Black has achieved with her Friday video.

But that’s not our goal.

Quantity of course is welcome, but in our case we’re looking to connect with a niche (and predominantly regional) market. One thing that’s great about new media and social networking is that it’s really centered around the idea of “pull.” If someone clicks on something, like a video for example, it’s because they are interested in that content. It’s a far cry from the old broadcasting spray and pray paradigm.

Plus who else can say they’re twice as fun… but only half as smart?

I’m pleased we can achieve this level of partial success to date because we’re running this operation (like many out there) on a shoe string. If it’s one thing we have in common with theater, aside from our love for the stage, it’s the need to make hay out of scratch.

The journey continues, and it’s a hoot sometimes (at least for us chronic web babblers) to take a quick glance back in the rear view mirror. Who knew that a silly DIY video we shot almost two years ago with a tiny Canon Vixia camcorder would be running neck and neck with James Franco and 127 Hours for the most viewed video on the SI channel?

Loni might kill me for this, and I may need to make an edit to this post when she finds out I’m putting the video in here, but I just couldn’t resist. From the DIY project on our baseboards in 2009, to the red carpet with James Franco in 2010 at the Mill Valley Film Festival – it’s probably the best way to sum up our adventure so far here on Stark Insider.

A quick note of thanks to so many of those around the San Francisco Bay Area, Napa, Sonoma and Central Coast who have supported our new media endeavor. We appreciate your support. In particular the San Jose Repertory Theater has been a real champion and superb partner. It was there that we started in 2009 with our first ever interview with the cast of The Kite Runner. Also, thanks to the Zukow-ites, CB, Holly, Erica, Virginia…. to people like Christopher Titus, Ed Norton, James Carpenter, Team Cirque, Tom Hooper, and Sam “Quirky” Rockwell for be willing to be a part of the adventure.