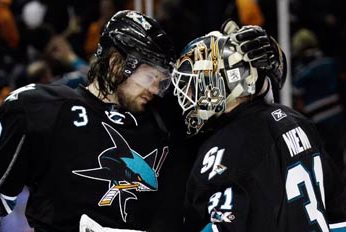 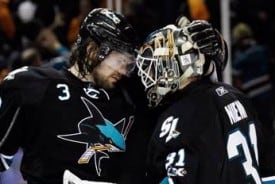 It’s official, the western conference finals is a series. Despite initial appearances, tonight was not by a long shot an easy evening, but the Sharks will gladly take the 4-3 win.

Thanks to a powerplay that clicked and strong first period performances by money-men Patrick Marleau and Jumbo Joe Thornton, San Jose was able to send a message: this series ain’t over.

McLellan too had something to say. By benching bulldog Ben Eager, an unforgettable, yet mostly negative force earlier this week in Vancouver, he confirmed that the Sharks would focus on their strengths: offensive-zone cycling, and a patient power-play. Both proved essential in tonight’s win.

But first: why-0h-why, do the San Jose Sharks refuse to make it easy?

With a convincing 3-0 lead in the first and the crowd busting through the roof you had the feeling this would be somewhat of a cake-walk, at least compared to the 7-3 thrashing in game two. As the game wore on it was apparent the Canucks would not simply roll over and die. In fact, the Sharks were outscored 3-1 in the final 20 minutes.

Marleau opened the scoring, on the first of many patient set-ups from Thornton. By the end of the first, after goals by Clowe and another by Marleau on a breakaway, it was clear: the team was responding to the bell.

Thankfully, McLellan concocted a new fourth line: McGinn, Mayers, and Desjardins. Equally prescient was the amount of ice time he afforded them early in the game which gave these energetic goldfish time to acclimate.

By the 2nd period, however, Vancouver stabilized somewhat. Thankfully Niemi (27 saves on 30 shots) was equal to the task and continually thwarted any attempt by the blue and green to get back in the game.

Then, in the third period, it was deja vu all over again. How many more times must Sharks fans face another third period disintegration?

Jamie McGinn, up until this point a very positive addition to the line-up, received a 5-minute major for boarding.

Another question: is any team as good as Vancouver at the backdoor play?

Henrick Sedin, so often the crafty passer on these types of plays, this time set-up Hamhuis who quietly snuck down from the point and slammed a perfect pass into the net, despite another noble attempt by Niemi. That made the score 4-2 and all of a sudden the HP Pavilion crowd, sensing another late game lull, was quiet with just over six minutes to go in the game.

Minutes later, the Canucks closed the gap to 4-3 on a nice powerplay goal on a shot from the point by Bieksa with McGinn still serving a major in the box.

The rest was a nerve-wracking countdown involving clinging, clearing, clutching.

A win is a win. But if Vancouver can play this well in an arena historically known to frustrate, then what will happen once they have a few days of rest underneath this Northern California sunshine?