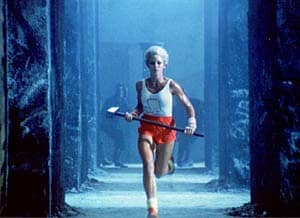 The iPad continues to steam roll. Perhaps competitors should be less concerned about it stealing away tablet sales and more worried about its impact on vulnerable PC shipments. No wonder Deutsche Bank analyst Chris Whitmore raised his target on Apple stock (AAPLL) today to $450 (up from $440).

In his report, Whitmore cut PC unit growth estimates for 2011 to 4% from 9%. Meanwhile, his forecast for tablet sales was bumped +12% to 45 million units — almost all of them coming from Apple. I should note that smartphones are also noted as having an impact on the sales of PCs.

Beyond the numbers, what does this data tell us about the marketplace and the potentially changing consumer preferences for mobile computing?

For one thing it seems we’re more ready to accept a tablet such as the iPad as a perfectly suitable replacement for a traditional PC, most notably a laptop.

However, another school of thought might suggest that this is a mini-bubble of sorts, and consumers are merely racing to get the latest and greatest (see the “Netbook” craze of the late 2000s as another possible example). Once the early adopters have had their fun, the market will slowly fade, or, at least the growth of tablet sales will curb.

The Canadian in me of course sees merits in both points.

I think there is something bigger going on here; a fundamental shift in the way we relate to computing (and technology in general). There are three reasons for this sweeping change:

1. The touch interface has been perfected, and we love it.

2. We’re willing to sacrifice some power for ease-of-use.

3. The cloud is here. It works and we’re finally ready to store data and personal information on servers outside our homes.

This is only the beginning. The tablet as we know it today — a simple, thin slab with a 10-inch display — is about to morph and evolve into several variants to meet a wide range of consumer and professional niches. Expect all sorts of design innovation: clam-shells (some already exist today, but lack Apple’s panache), double-sided displays, multimedia configurations with incredible surround capability (eventually with built-in projectors), industrial variants suited for healthcare, military, and government applications.

If 2010 was the year of the great tablet experiment, then 2011 is the year the transformative shift in personal computing began.