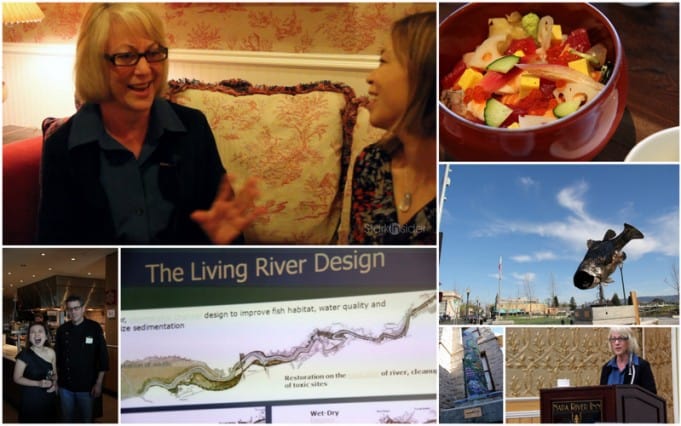 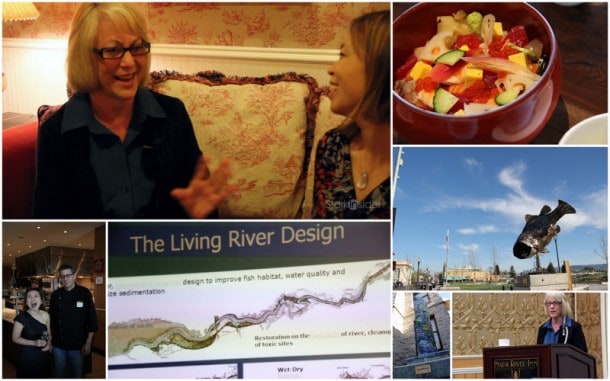 Last week we enjoyed breakfast at Hatt Hall with the Mayor of Napa, Jill Techel. There’s a lot of interesting news coming out of downtown Napa and Loni had a chance to sit down and talk with her about several topics including floodwalls, art, and — of course — wine.

Many of us recall memorable vintages when we think Napa. For the downtown region certain years have been memorable for the wrong reasons. With the Napa River and Napa Creek both next to the city, flooding is a challenging issue. Since 1862, there have been 22 serious floods. In her slide presentation “Mayor Jill” (Loni’s term – see video pls) showed photographs from several of them: 1905, 1940, and, most recently, in 1986 when Water Street lived up to its name. Since 1997 agencies and local government has invested almost $900 million into construction and real estate projects as part of the Flood Protection Project.

The plan, which has become a model for other regions across the U.S. also looking to mitigate flood risk, calls for achieving a “living river.” This means that there is no disruption to the river itself (for example, the natural slope, width, depth, and ratio are all maintained). Rather, protection efforts are aimed at hopefully achieving a harmonious relationship between the river, and the people and the town.

Call me naive, but it was an eye opening presentation and conversation. I never realized this was even an issue. Like a lot of people, to me Napa was just another city that we’d pass through on our way to the wineries up further north along Highway 29. It was never a destination in itself. However, based on our three-day tour last week, that is changing rapidly. Napa is emerging as a go-to place for vibrant nightlife, hip wine bars, and world-class restaurants (Napa has more Michelin stars than any other major metropolitan region in the Bay Area including even San Francisco).

“We opened about a year ago.”

Yes, there are still some for-lease signs and vacant store-fronts. More often than not, though, you’ll smell fresh paint, see newly constructed or renovated buildings. Talking to owners last week, many shared the same story. They had come here “about a year ago” and opened a new business. Morimoto is the flagship example. But spend time in Napa and all of a sudden there is a long-list of places to see, things to do.

We have more to report on downtown Napa including a wildly colorful Napa historian (and actor!), segments shot inside some of the restaurants, and some of our favorite spots to eat – plus Loni might even have some top secret sushi advice… you might be surprised at her tips.