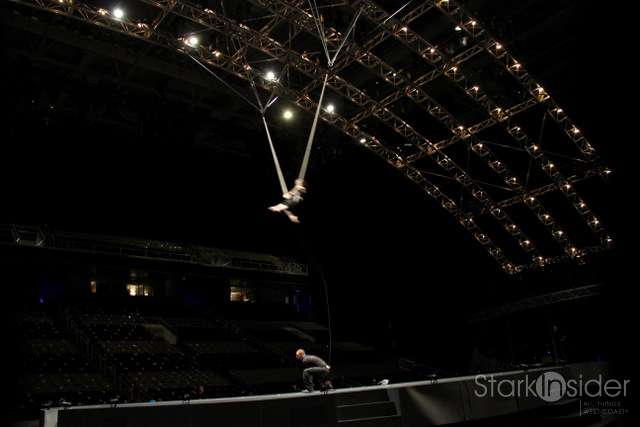 Quidam (“kee-dam”) means regular person, regular life – an anonymous passer-by. The kind you might encounter on an everyday street. Once again, I learned many things when Cirque invited us to go behind the scenes at HP Pavilion for their latest show. Just a little irony there though, “regular” is not one of the first words that comes to mind when describing Cirque.

Speaking of regular. Cirque performer Ardee Dionisio (“Target”), once a regular guy, was discovered on the not-so-anonymous YouTube. More on that in a moment.

I was also reminded how generous the folks are at Cirque. Like our shoots when OVO was in town, they afforded us amazing access to the performers, who were gracious and all too willing to share time with us.

We watched the rehearsals; with all the mistakes, restarts, and technical glitches in full view. It’s easy to forget sometimes, sitting in the audience, spellbound by the costumes, the music, the euphoria that a lot of sweat and hard work goes into making the show appear seamless. And let’s not forget the emotion. For many of the performers (as you’ll see in this video) performing with Cirque is a childhood dream come true.

Full disclosure: I admit, I have a soft spot for Cirque. I. Am. Canadian. And I love to hear the French Canadian accent. It reminds me of home (Ottawa/Hull). It’s hard not to share a certain amount of pride for this juggernaut that originated on the streets of Montreal that has become a massive phenomena – 7 shows alone in Las Vegas! To the critics who suggest it has become over-commercialized, I say boo. U2 sells out arenas too. There’s a reason why these incredibly artistic shows are mega-hits. 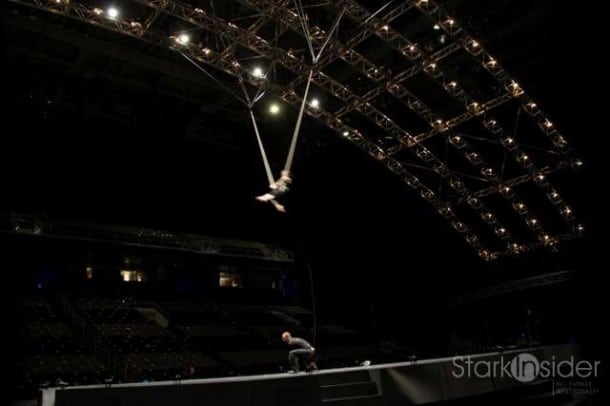 One of my favorite aspects of Cirque is that they don’t use animals. I’m not fond of animals in captivity (MGM Grand for instance). It feels slightly medieval to me. So this modern, re-imaged version of the circus sits right. After all, it celebrates what us as humans are physically capable of achieving when we push the limits. And by “us” I mean “them” – the pros you see here in this video. I still require an Advil or two to make it through a game over at Sharks Ice in downtown San Jose.

But there are some fun story lines here that we uncovered as Loni interviewed the performers and as we navigated the tricky backstage corridors and darkly lit caverns of the arena.

One is that Ardee, who plays “Target”, was discovered on… YouTube, the 21st century version of a street corner. Sound familiar – Justin Bieber, Rebecca Black? Of course Ardee hasn’t gone quite as viral (yet), but it’s quite amazing how social media can now be used to get talented people before the eye’s of the talent seekers, in this case the folks at Cirque du Soleil HQ in Montreal.

Another interesting bit: aerial contortionist Isabelle Vaudelle, who performed in the original edition of Quidam in 1996, is performing again here in San Jose, and on through the tour. That’s Wayne Gretzky-like pedigree.

Well, I could write more, but why – you should watch this video… life in the modern-era circus… let the show begin…

This one was a certifiable nightmare. Not because of Cirque or access in HP Pavilion. Perfection there on all accounts. No, this was one of the days where all the technical issues that could go wrong, went wrong. I had batteries die at bad times (right in the middle of a “money” shot). Memory cards filled up prematurely (you need to be careful to delete the “trash” folder or you end up carrying old data that takes up space). The Zoom Handy H1 mic I was using as a wireless lav is not giving us enough gain. So we had to boost volume in post which results, of course, in reduced S/N. Woe is me.

Then there was the on-air talent, and my proclivity to want things done now! When it’s pouring rain outside, and hunger is high, often patience is in short supply. In the end some how, some way, it manages to work itself out.

The worst part, though, is I discovered my Canon T2i may be defective. If you watch the video closely you’ll notice a tiny red dot – like a pixel from a computer screen. I think something is damaged in the electronics and the T2i has a defective pixel. At first I thought it was dust. I need to research this more, but looks like I’ll need to call Canon to find out what to do about this. It’s a little disappointing given that I was, for the most part, pleased with most of this footage.