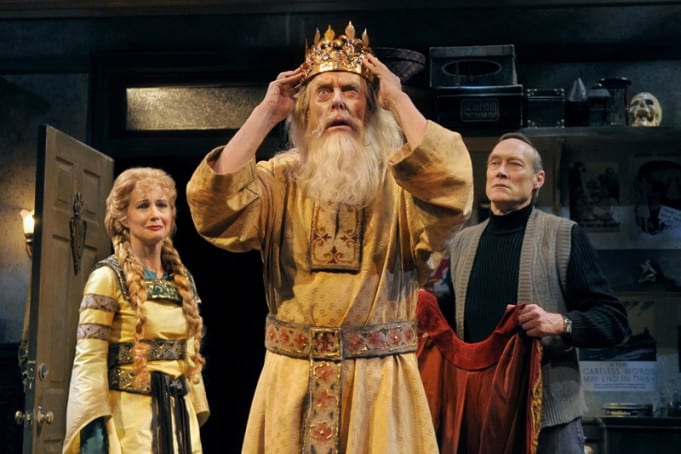 The opening of The Dresser at the San Jose Rep last night was one of those magical moments in live theater — that what was unfolding before our eyes on stage was very special, perhaps even historic. With the one of the countries’ greatest stage actors in Ken Ruta, and Bay Area star and legend James Carpenter in the two lead roles, you knew there could be fireworks. And the performances did not disappoint. In fact, they exceeded all of my expectations.

Often called a love letter to theater, The Dresser is majestically  staged, and exposes the inner workings, desires and motivations of the passionate world that is Theatre.

Set in a theater somewhere in the “English provinces” against the backdrop of World War II, a rag-tag group of actors attempt to perform Shakespeare’s King Lear against all the odds. Sirens wail, and occasionally bits of the building even collapse around them. The lead in the play-within-the-play is the egomaniacal Sir (Ken Ruta) who is virtually on life support (“I decide when I’m ready for the scrapyard!”) and might be partially insane. Yet, he still enjoys a good flirt or two with stage hand Irene (Blythe Foster).

The show of course revolves around The Dresser, Norman (James Carpenter), who fancies a bit of the bottle while he works, endlessly plying to the needs of Sir, his boss and actor-manager.

Hopefulness is a disease.

Though the story is centered around Sir and Norman, and their co-dependent relationship, strong performances in supporting roles add wonderful depth to the production including Rachel Harker as Her Ladyship, Lynne Soffer as stage manager Madge, Blake Ellis as Oxenby, and SJ Stage regular Julian López-Morillas as an older actor forced to play the Fool.

Icing on the cake is the new partnership between San Jose State University and the Rep which resulted in the inclusion of four SJSU actors: Drew Benjamin Jones, Jason Kapoor, Shane Rhoades, and Adam Sessa. Their presence enables the show to have a larger feel (at ostensibly lower cost), and provides professional training grounds. Imagine learning from the likes of Ken Ruta and James Carpenter!

Artistic director Rick Lombardo directs this production and his experience shines. It’s majestic, well-paced and heartfelt; quite an accomplishment given the density of dialog, especially in the first act.

In act 2 “After the Curtain” there’s a neat trick involving the set (Kent Dorsey) which is executed with aplomb. I think it might be the niftiest bit of transformation I’ve yet to see on this stage.

But at the center are two of the mightiest actors around whose magnificent work here raises the bar on what’s possible in regional theater. Watching Ken Ruta and James Carpenter perform together in The Dresser is simply, for lack of a better expression, mind-blowing. What especially stood out to me, aside from the authenticity and incredibly controlled delivery of lines and emotion, was that neither ever attempts to out-act the other. These are two accomplished actors, with successful careers so I suppose it would be naive to think that would even happen anyways. Still, the chemistry is — still for lack of better vocabulary — out-of-this-world.

Anyone who has seen James Carpenter in something like The Creature or as Scrooge in A Christmas Carol at A.C.T. will instantly realize this guy has range. No doubt it helps that he has chiseled features, a lanky frame, and expressive eyes. But that subtle, then bellowed delivery… well, there’s a reason why we can’t wait to watch him perform.

Everything is bang-on — acting, lighting, direction, costumes, the set, the laughs, the drama — and it’s the best overall production I can recall seeing at the Rep since The Kite Runner. That every single person was standing after (the second) curtain dropped is testament to this triumph.