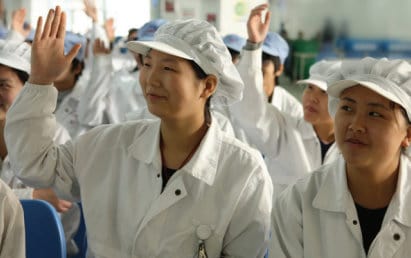 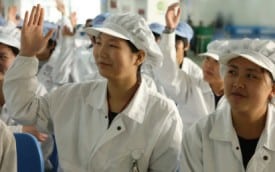 How is it that Berkeley Rep continues to be a lightning rod for anything and everything related to pop culture, contemporary stage, and — its latest specialty — controversy?

Mike Daisey’s one-man show, The Agony and Ecstasy of Steve Jobs, might be coming to a close, but the whirlwind of media attention surrounding its subject matter appears to be only growing… yet again.

Last year a rash of suicides at Foxconn, a now globally recognized Chinese (Shenzhen) manufacturing plant prompted media attention on sub-par work conditions. Without unions and in absence of proper management processes, humans were essentially being treated like assembly-line machines, all in an effort to efficiently build the latest iPhone or iPad. And make money.

While Foxconn does contract work for other high profile tech companies including Sony, Dell, and HP, it’s Apple that draws the ire of Daisey and more often the scrutiny of the press. Hey, no one said being number one was easy.

This week Apple released its annual “Supplier Responsibility Progress Report” (which it has done for the past four years from what I can tell). The opening paragraph of the 23-page document seeks to at least share some responsibility:

On page 18, the meat of the report begins under the section titled, “Responding to Suicides at Foxconn”:

Like many of our customers and others around the world, we were disturbed and deeply saddened to learn that factory workers were taking their own lives at the Shenzhen facility of Foxconn […] The company is implementing an employee assistance program (EAP) that focuses on maintaining employee mental health and expanding social support networks […] Apple will continue to work with Foxconn through the implementation of these programs, and we plan to take key learnings from this engagement to other facilities in our supply base.

Like clockwork, left-leaning Apple news outlets have immediately come to criticize the report, suggesting it does little to help the situation. Leander Kahney of Cult of Mac wrote, “A few years ago, Nike changed its sweatshop practices in response to consumer outcry. Apple should be held to the same standards.”

But the opposite response has been just as vigorous. This came from a comment by Joseph, also on Cult of Mac which has been a hotbed for discussion on the topic:

Where is the evidence that the people who work at Fox Conn are more miserable than anybody else because they are working at Fox Conn? A handful of anecdotal experiences from Mike Daisey are not evidence. There is a certain liberal tendency to pity people who don’t appear “lucky” by the yardstick of a typically western privileged white middle class, as if that’s the objective measurement. It’s an attitude loaded with cultural and class bias, and I wonder how much of that isn’t driving the outrage about Foxconn.

Part of me wonders had the iPhone not been so sexy or the iPad not so in-demand would we have cared that much at all?

These aren’t the first products to be made in conditions less than humane. Look at just about any high volume product (and increasingly even niche products) with a “Made in China” label on it; is it realistic to assume that only Foxconn hires underage labor, or that only Foxconn employs less than ideal labor practices?

That doesn’t make it right, of course, but perhaps the blood on the keyboard is just a tad bit hypocritical.

After all, if you vehemently oppose the idea of Foxconn and Apple and high margin output, then why not put your money where your mouth is and not buy Apple products? Better yet, those who really, really want to protest should grab their MacBooks and head to AT&T Park and burn them in a fantastical heap.

Probability of that happening: zero.

No one wants to bite the hand that feeds them.

Instead, we’ll go watch Mike Daisey at Berkeley Rep, in the same town that is now getting its own Apple store. It’s far more entertaining, less exhausting, and as an added incentive ensures that we’re damn angry — but with a Starbucks-like dollop of entertainment value to go along with our guilty rage.