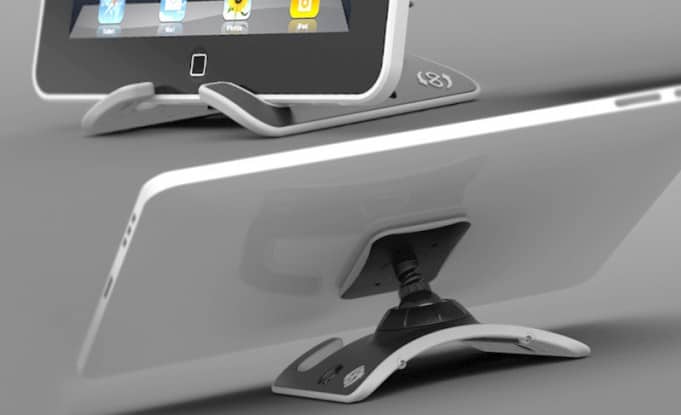 A few things jumped out at me when I first starting reading about the PadPivot.

The first was I don’t even own an iPad yet and here I am researching accessories for it. Well, actually that really brings up point number two. Shockingly, it was my wife Loni who brought the stand to my attention, which might mark a first for me. This normally happens the other way around in which I explain to her all the amazing things “gadget x” or “accessory y” will do to improve our daily lives.

But the other interesting aspect of the PadPivot, aside from the fact that it does look really useful, is that its designers raised funds using a micro-VC site called KickStarter, a new way to “fund & follow creativity.”

The service is focused on matching inventors with investors (aka, pairing cash with the desperately smart), in very tiny increments. In the case of the PadPivot, you can get in on the deal for as little as $5 (nano-venture?) which gets your name printed in their “making of” book and the web site. For $25 you actually get the product when it ships.

Did Kickstarter work for the founders?

In this case, a resounding yes.

Just as I was about to fire off a quick post about it, I received an email and learned another nice little factoid. The product is “the brainchild of Canadian inventor Bernie Graham in collaboration with Seattle based industrial designer Jim Young who met on the social design website Quirky, then collaborated, and ultimately prototyped this entire project over the internet. ” Now that’s a pretty sweet testament to the power of social networking and innovation! And, of course, need I even point out the brilliance of Canadians yet one more time?

If you want to meet these guys or see the PadPivot head to MacWorld.