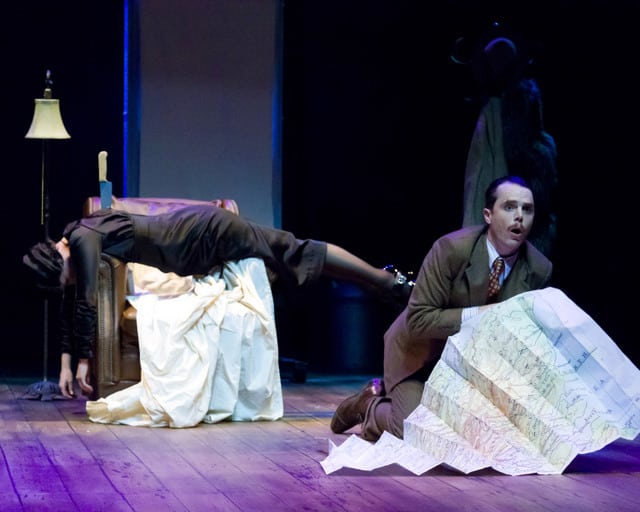 Based on the book by John Buchan

From the 1935 movie by Alfred Hitchcock

When you have four actors playing over 150 parts in a single show, you expect a certain degree of talent. But in Hitchock’s entertaining farce The 39 Steps I didn’t ever imagine I’d see this much talent on one stage, at one time.

For the uninitiated, hold onto your Bobby hat, this one’s an outrageous send-up of all things Hitch. We have the man on the run, wrongly accused of murder, a mysterious and beautiful blonde spy, and trains, and ladders, and corn-dusters (but of course!), and even Alfred Hitchcock himself — as he’s wont to do — making a couple of amusing cameos.

And what would a classic Hitchcock production be without shots being fired during a live theater performance? It’s a welcome device, and one we’ve seen on the silver screen several times before including in the Man Who Knew Too Much (1956) – not (and unlikely) to be confused with Bill Murray’s The Man Who Knew Too Little (1997).

The 39 Steps is actually based on a 1915 novel by John Buchan. Alfred Hitchcock added a splash of romance before bringing the suspense to the big screen in the 1935 landmark film. The stage production seen here was adapted by Patrick Barlow and morphed into a spoof which makes fun, in the grandest of traditions, of the film-makers’ style. Homages to Psycho, North by Northwest, Rear Window, tickle our sense of nostalgia as our man Richard Hannay dashes from the “lights of London to the moors of Scotland and back again.”

Directed by Robert Kelley, the local icon who founded TheatreWorks in 1970, the production moves swiftly and is astoundingly clever in its use of props and imaginative acting. In one scene the four actors pile into a “car” made from a chest, a crate and a wheel. Yet not for a moment do we think they’re not traveling down a bumpy British road through the woods, before being interrupted by a flock of sheep.

It’s worth pointing out that the pre-cursor to Google may very well have been “Mr. Memory.”

The set (Joe Ragey) is one the most innovative I’ve seen yet at TheatreWorks with upper balconies located on either side of a vaudeville inspired stage, and deceptively simple backdrops and overlays that immediately bring us deep into the thrilling chase. I told my wife Loni while we were seated waiting for the show to begin that it reminded me of the atmospheric video game BioShock. Christopher Graham’s sound is likewise a hoot, with snippets of classic scores that we all know and love used throughout — my favorite being the crop-duster vignette. 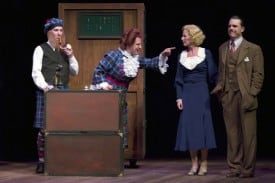 I should note that Mark Anderson Phillips in the lead role is a stand-out. We’ve seen him before in other strong performances including Opus (TheatreWorks) and The Weir (San Jose Repertory Theatre), and he’s outstanding again here in a role that requires equal parts physical comedy, charismatic tinsel-town charm, and more than just a tinge of Brit sardonic line delivery. It’s a remarkable performance, and certainly an actor to follow — and again, the entire cast here is strong.

I’m simply not a fan of Hitchcock’s Monty Python-like humor (as much as I am a die-hard fan of his films). Of that, I’m admittedly probably in the minority. If someone were to tell me they thought it was the best show they’d seen in ages, or that it’s on par or better than other variants of the material, I would not disagree for a moment. In fact based on the standing ovation and reaction of the crowd (with no shortage of wild laughter, snickering and hollering) on opening night in Mountain View, this show is a real crowd pleaser.

The 39 Steps
TheatreWorks
Mountain View Center for the Performing Arts
3.5 out of 5 stars
Adapted by Patrick Barlow
Based on the bok by John Buchan
From the movie by Alfred Hitchcock
Directed by Robert Kelley
Starring Mark Anderson Phillips, Dan Hiatt, Cassidy Brown, Rebecca Dines