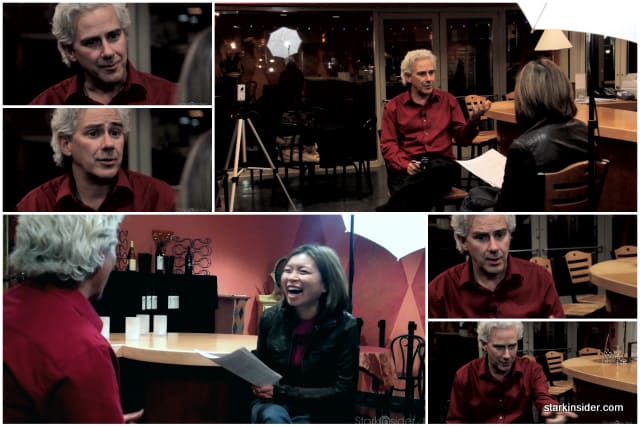 It’s 1942 in Britain and the smell of death is in the air. Well, as they say, “the show must go on.” In the comic tragedy The Dresser, a play often regarded as a love letter to theatre, the actors must do what they can to prevail against the odds. Sirens wail, bombs explode, and walls crumble… and you thought your day at work was tough.

“It’s insane that they’re trying to put on a theater play,” says Rick Lombardo, describing the circumstances the characters face. “He [the lead actor] just came out of the hospital. He discharged himself…. he may have just had a stroke. He’s certainly having some sort of emotional and physical breakdown.”

We met up with the cast and director Rick Lombardo after a long day of rehearsals at San Jose Rep for some in-depth discussion about the production which opens next week. And perhaps just like Sir and Normal, the troupe at the Rep is trying to keep order amidst chaos. The message here, however, has broader context and relevance.

“When all is falling apart around us how do we get the will and the strength to still believe and to still go on?” he asks.

The play debuted on Broadway in the late 80’s and received two Tony award nominations. In 1983 it was turned into a film directed by Peter Yates and starring Albert Finney.

Rick Lombardo’s wife, Rachel Harker, makes her debut in the play. Loni tries as she might to dig for the story within the story. What is it like directing your wife? I could add some interesting color here myself perhaps, but I somehow believe there are years of opportunity ahead to do just that.

This is the first segment of the interview of The Dresser. In the next part you’ll hear from the rest of the cast including James Carpenter (Norman), Her Ladyship (Rachel Harker), Oxenby (Blake Ellis), and Geoffrey (Julian López-Morillas).

And just in case, a little tidbit for those who may be coming up to speed on the concept of a dresser, per Wikipedia:

“A dresser is a theatrical stagehand who is involved with maintaining costume quality at each performance. They are hired by either the director, producer, or wardrobe supervisor. They report directly to the wardrobe supervisor and are usually paid by the hour.

Dressers are responsible for assisting cast members with costume changes backstage, when necessary. They are often used to assist primarily with quick costume changes, where a character exits and must enter again very quickly wearing a different costume.”

Oh, and lastly, a question: so is artistic director Rick Lombardo a Norman or a Sir?

The Dresser opens February 2 at the San Jose Repertory Theatre.