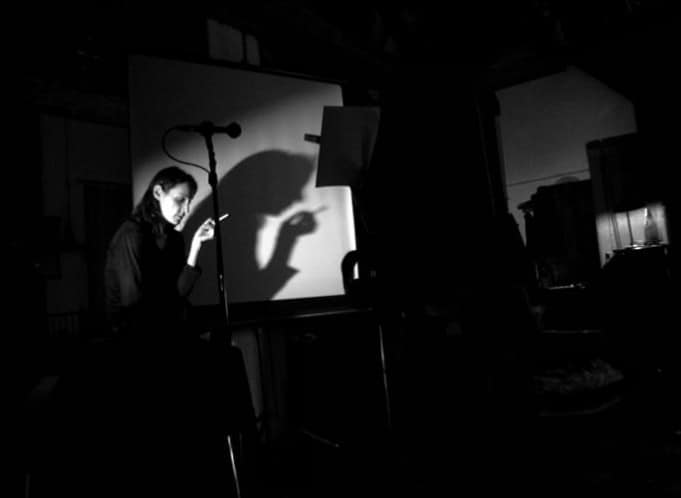 3.5 out of 5 stars - 'Sweet Stuff'
Directed by Pedro Costa
Starring Jeanne Balibar as herself
Documentary, 80 minutes, 2009
Review by Clinton Stark

Documentary Ne Change Rien (Change Nothing) is the welcome anti-thesis to today’s overblown 3-D spectacle. Shot entirely in black and white it is at times beautiful to watch. Over eighty minutes director Pedro Costa patiently follows French singer Jeanne Balibar from rehearsals to performances to dressing room conversations. For the most part his camera is fixed in place; scenes are cloaked in darkness. The result is a film that feels early 20th century, and evokes haunting artistic consciousness. It’s certainly a unique atmosphere and could be a welcome change if you’ve tired of traditional shock factor, talking head docs such as Super Size Me and Sicko. Rapid fire music video editing this is not. Rather, it could be considered part of the “Direct Cinema” 1960’s movement which adopted a philosophy of reactive film-making.

The film opens with Balibar — who I could easily see in a duet with someone like Leonard Cohen — singing “Torture”  in her droning, nihilistic style. “Torture / Torture / Baby, You’re Torturing Me” Shadows slowly move across her face which is barely discernible. A guitar and drums provide an eerie, reverberating backdrop that repeats. If you get David Lynch like flashbacks, you’re not alone. This could be the real-life Club Silencio.

Unlike the documentary Gimme Shelter featuring The Rolling Stones, this is not about the singer. We don’t really get to know Balibar (and I’d never heard of her before), except what we see during performances.

What we’re looking at, of course, is the creative process revealed in its purest form.

Songs are improvised, lyrics are tested. During a classical singing rehearsal Balibar is stopped repeatedly by her demanding teacher. Whether or not Ne Change Rien is entertaining or engrossing is a different matter. It feels like art, no doubt. It looks like art. But I have to wonder if there is a fine line between art and spur of the moment jamming?

Find out for yourself, Ne Change Rien is playing later this month at Yerba Buena Center for the Arts’ YBCA Screening Room in San Francisco. Thu, Jan 20 7pm and Sun, Jan 23 2pm. Tickets are $8.