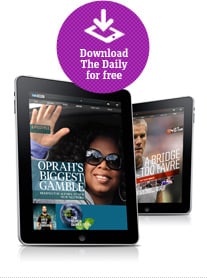 Steve Jobs didn’t join Verizon’s CEO Ivan Seidenberg on stage for the iPhone announcement this week in New York, but reports (Reuters, and others) indicate he will appear next week with publishing tycoon Rupert Murdoch. The news is about news. Murdoch will likely introduce his $30m publishing project, The Daily, a digital newspaper only available for the Apple iPad on January 19 at the Museum of Modern here in San Francisco.

There have already been embargoed press briefings and early sightings of the app. An estimated 100 journalists are assigned to the project, with news bureaus already in action in San Francisco and New York.

The Daily will join a list of brands — Glamour, Wired, Men’s Health, GQ, People, The New Yorker, Esquire — attempting to monetize publishing in a world of tablets. The jury is still out whether this will save the publishing industry.

I’m anxious to see the results and follow the impact of The Daily. No doubt the quality will be impressive (staff pedigree includes The New Yorker, AOL, Forbes, Politico). And at $0.99 per week, the price seems right (although I’ve heard conflicting reports here of $0.99 per issue and/or $4.25 per month — is Murdoch testing pricing acceptance?).

With our hands-on time here over the past few weeks with the Samsung Galaxy Tab, a 7-inch tablet running Google Android OS, a competitor to iOS on iPad, I’ve realized that tablets are ideal for reading newspapers, books and magazines. Others I’m sure knew this long before me, but I had my doubts early on.

Apple got their billboard ads — lining Highway 101 in Silicon Valley and hanging high above Union Square — right. The tablet experience is personal. And showing people (or at least their legs) comfortably reading on the iPad absolutely foretells the future of content consumption. The 8.5 million or so units Apple sold last year is the tip of the iceberg, eMarketer expects that number to grow by 147% in 2011. And here comes Android as we witnessed at CES last week in Vegas.

So now I find myself reading WSJ, NYT, Time, RSS feeds via Pulse (alas Flipboard is not available for Android) and Financial Times on the Tab on a regular basis. But one thing I consistently find odd are the pricing models.

Why is it that the digital subscriptions for many of these magazines and newspapers are more expensive than their old-fashioned print counterparts?

Someone suggested to me its a value-pricing model. That the convenience of having a digital copy in your hands without any fuss is worth a premium. Maybe. I certainly know it’s not based on a cost-based model. The infrastructure required for print as we know is monumental compared to digital which has an increment cost of delivery for each new subscriber of essentially zero. On this point it looks like The Daily will be priced to build readership.

Whether Rubert Murdoch’s experiment disrupts publishing remains to be seen. However, it doesn’t take a rocket scientist to predict that the days of print are limited. You’ve got news!