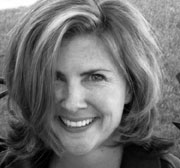 What is it about tragedy that inspires the creative process? Playright Allison Moore’s latest play Collapse, inspired by the collapse of the Mississippi River Bridge in Minneapolis in 2007, is another such demonstration — artistic process meets real life calamity. At these moments perhaps a laugh is eternal.

Collapse came out of the Global Age Project, the annual new play festival held by Aurora Theatre in Berkeley, where it will also enjoy its world premiere on February 3rd.

Moore’s work has been developed or produced at the Guthrie Theater, Actors Theatre of Louisville, Marin Theatre Company, The Lincoln Center Director’s Lab, and The Playwrights Center, among others. Her play American Klepto was developed at the 2006 TheatreWorks New Works Festival and was nominated for the Susan Smith Blackburn Award. Recently, her horror spoof Slasher (“You will laugh… until you scream!”) was seen at SF Playhouse.

Allison graciously took some time to talk with Stark Insider.

Stark Insider: Thanks for joining us Allison to talk about your new play, Collapse. I read that the idea was inspired by the 2007 collapse of the Mississippi River Bridge in Minneapolis. What’s the connection?

Allison Moore: I’ve lived in Minneapolis for a long time now, and the bridge collapse was a huge event, with repercussions that spanned several years. The bridge was an eight lane section of Interstate 35W that carried 150,000 cars across the river every day. My husband and I use the bridge all the time. He was on his way to work when the bridge fell, and thankfully, he chose to take the 10th Avenue Bridge instead of 35W that day. So while I don’t personally know anyone who died or was injured in the collapse, it hit very close to home. The collapse was a tremendous tragedy – 13 people died. It’s also miraculous in that more lives weren’t lost. And because this major highway was shut down for over a year while they were building the new bridge, it had an effect on the daily lives of pretty much everyone in Minneapolis. I didn’t know I was going to write about it until I stumbled across a cache of video interviews with survivors that were recorded for the one year anniversary of the collapse in August of 2008. The survivors’ stories were so compelling, they really stuck with me. And when the global economic collapse hit in October 2008, I started seeing some parallels between these two different kinds of collapse, and the effect that these very different traumas have on people and relationships. Both events underscore the unpredictability and fragility of our lives. How do we deal with that? Do we accept it? Do we deny it? What do we do? Those are the questions that sparked the play.

SI: Personal calamity seems to be the order of the day in this comedy… the lead character’s husband calls in sick, the couple is struggling with infertility, and job stability is in question. Are we reading into this too much if we see a hint of therapy in action, or is it really the layer under the surface of middle america?

AM: The characters and situations are works of my imagination. In a play, you always want to raise the stakes for your characters, so I really piled it on! A lot of the comedy in the play comes from watching the characters working desperately avoid dealing with the obvious, or trying to control things that are clearly out of their control. That’s funny to me. And I think we can all recognize ourselves in that, especially now. These are very anxious times. People are out of work, or afraid they’re going to be laid off. People are losing their homes – or they’ve managed to keep paying their mortgage, but now they’ve lost all their equity and have no idea if they’re ever going to get it back. Those are real anxieties, and they’re certainly not limited to the Midwest.  Intense anxiety propels people to do ridiculous things sometimes – which is great stuff for comedy. But it’s got to be coming from a real emotional need for the audience to stay with the story and keep rooting for the characters.

SI: “Illicit package.” That caught our attention… any hints or clues?

AM: You’ll have to come see the play.

SI: Who are some of the playwrights or other artists that inspire you and your work?

AM: Oh, there are so many! I’m blessed to live in a community that’s overflowing with incredible playwrights whom I get to see and talk to and hear their work on a regular basis. It’s like having impromptu master classes available all the time. I’d say the writers whose work I go back to and study with some regularity are Carlyle Brown, Kelly Stuart and Carlos Murillo. They’re all insanely good writers.

SI: Writing strong, believable dialog I’m guessing is one of the most challenging aspects of bringing a play and its characters to life. Are there any tricks of the trader here? Do you ever, for instance, test out lines on your friends and family?

AM: I don’t test things out, I’m not that kind of writer. I don’t write witty quips, and I write very few straight-up jokes. For me it’s about really knowing who each character is – what they believe, how they want other people to see them, and what they’re trying to get in a given situation. Then I just let them talk to each other and try to get what they want.

SI: BTW I’m a confirmed horror film fanatic. I’m the only person I know that owns the Nightmare on Elm Street box set, all seven films. So your play Slasher at SF Playhouse last year was a lot of fun. But it made me think about your range as a writer. Collapse is a comedy. What is it that draws you to certain subject matter?

AM: It’s so funny, I’m actually not a big horror movie fan, but working on Slasher, I discovered that many of my friends are! But to your question: writing a play takes a minimum of a year, and often it’s two or three years between first draft and production. So it’s got to be a subject matter that can hold my attention, some question I’m genuinely interesting in exploring from multiple points of view. If there’s a question or a situation that I find myself turning over in my mind, that’s a sign to me that there might be a play there.

Depending on my mood, it’s either Election or Volver.

SI: Thanks and best of luck with the (rolling) world premiere of Collapse!

AM: Thanks so much, Clinton!