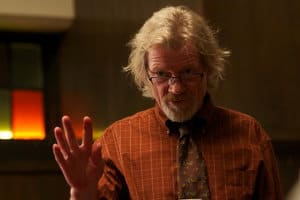 “I’m almost done making movies folks,” said film director Kevin Smith in a rambling, entertaining and informative post-film speech for a Sundance screening of his new $4 million indie flick Red State. But not before he reinvents the independent film distribution model, or at least goes down swinging (but not chasing the puck!).

Minus the charming sailor invectives, the idea is that he is sick and tired of handing over his baby to film distributors who, at arms length and with passing interest, pour $20 million on top to bolster the opening three days of a movie. To paraphrase, why spend four times the budget on marketing? He broke it down for the (patient) Sundance audience: $4 million film budget + $2 million top for the additive distribution margin (assuming $6 million deal) + $20 million marketing to get into theaters = $26 million.

So all of a sudden a small $4 million film indie needs $26 million to break even.

Instead, as pretty much everyone now knows, he “bought” the rights to his own film during a mock live auction for $20 and will try to recoup investor’s $4 million before the film opens in October. He and his team are “Captains of their own futures.”

Normally filmmakers and producers discuss budgeting for “P&A” which stands for prints and advertising. In this case Smith and crew will ignore the “A” and budget only for prints which of course are necessary for theaters to project the film.

To do this he announced a road-trip which starts in March at Radio City Hall Music Hall in New York and then heads across the country, one city at a time. He compared it to the old days when a film like Gone With the Wind would play a city, pack-up, head to the next and do it all over again. “I know how to market this film!” he told the audience, reminding that he’s been in the business for 17 years.

So will it work?

However, while this may work for Red State (which coincidentally was shot entirely on RED digital), I’m not sure it will be a template for others simply because Joe Filmmaker doesn’t carry any recognition. Plus first timers are likely to do what he did in his early years and simply head to Sundance looking for the first semi-decent distribution deal; an idea which he said in his speech he can understand and is not necessarily stupid. 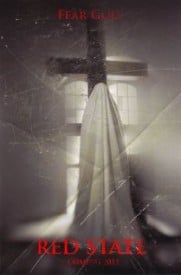 Kevin Smith is a polarizing figure in film. He comes across at times as long-winded and whiny — see Twitter for world class rants in process. On the other hand, he has a clear and compelling point of view. No doubt about that. He has experience. And independent film needs a way forward lest we all drown in a sea of mega-blockbuster franchises.

Besides it’s hard not to like a guy who counter-protests against religiously bigoted protesters.

Earlier outside the theater the Clerks and Mallrats director carried signs that read “Shirley, you can’t be serious,” “GOD hates rainy days and Mondays,” “DOGMA is Dogshit,” “Down with Mutants,” “GOD hates critics!” and “Dick tastes yummy” in response to a Church group protesting against gays, “You’re going to hell,” followed by chanting, “GOD is love!”

But perhaps best of all he stood there at Sundance during the post-film discussion holding the hockey stick that legend Wayne Gretzky last used as an Edmonton Oiler before being traded to the Los Angeles Kings. To a hockey guy like me it’s supremely cool. But the underlying message of transformation is not lost on me either, at least I don’t think.