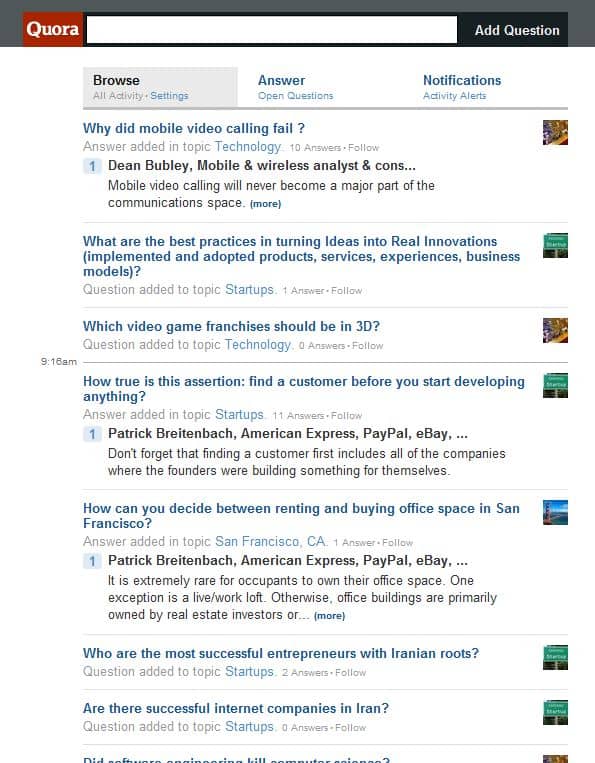 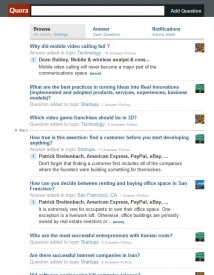 No. Quora does not deserve the hype, at least not entirely. We’ve seen this before, Yahoo Answers and Ask.com come to mind as do countless other Q&A sites that eventually fade from memory primarily because of low quality content. Plus, don’t Google, Twitter, Facebook, and Wikipedia already give us most of what we need?

For those living underneath some kind of Al Gore autographed rock, Quora is a new site — a much hyped site… it’s almost as if the company received a round of funding in 2010 and has allocated a large portion to marketing and PR — that allows people to simply ask questions and to get answers. You can also follow specific topics, like “Android Tablets” which returns some of the following conversations: Which Android Tablet are available in Norway? Will tablet sales eclipse PC sales? If so, when? Who will win Windows 8 or Android in tablet race?

Quora’s interface is a mixed bag. On the one hand it’s almost instantly familiar (not a surprise given the start-up is run by former Facebook employees). There is a standard social networking style stream in the middle that shows all the activity happening amongst your followers and topics. There’s an inbox, a large search box and options to manage your settings. But navigating is not as easy as say Twitter or Facebook, and understanding how to get the most value out of it takes some time — although, I’ve noticed that the Quora team has been making incremental UI updates that have improved matters.

So what, if anything, makes Quora unique? 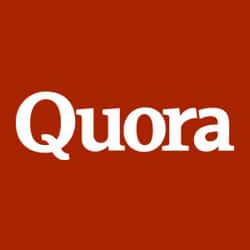 Well, for one it has the tried-and-true, must-have social networking component that we all love. And there’s definite value there as you can follow people you know and/or respect, thereby increasing the quality of information in your stream.

And quality of information, the most touted aspect of Quora, and largely the one most early users have been citing as the reason why it will succeed, is possibly a key differentiator. Unlike Google search, for example, answers here are based on merit and credibility — at least as far as your connections go that is. The idea is that you’re getting results based on expert opinion and information, not a robot-based algorithm and pagerank.

I found the answers and information on Quora to be quite good. One of the co-founders told TechCrunch last year, “People say they feel smarter after they use Quora.” There may be truth to that as I discovered.

Power of the crowd

To work successfully Quora relies on crowd sourcing. That is, people need to spend the time to create, edit and curate content. With Wikipedia we’ve seen this is not necessarily an issue; the masses are more than willing to contribute their energy towards a cause and the greater good. The risk, however, is that not enough compelling content is created early on, which could in turn decrease the likelihood of visitors returning to the site.

From what I can see, however, there is no game-changing strategy or feature here. Facebook, and even Twitter could eventually employ similar capabilities (or perhaps just acquire Quora).

One of the reasons why Quora won’t become a large, mainstream network is that it’s, by nature, about mostly serious stuff. You don’t come to Quora to play Farmville, or to post a photo of you and 50 Cent. Of course that’s the point. Masses turn to Twitter and Facebook for escapism and the social. Thinking is somewhat more practical and absorbing so in some ways by this very fundamental reality Quora will likely end up a niche service.

But, for me at least, the biggest reason I’m now wowed by the site is that I signed up and visited it once a few weeks back, and then didn’t return again until this morning to write this piece.

As for one of the earlier questions concerning tablets:

Will tablet sales eclipse PC sales? If so, when?

Forrester Research published a report on tablet sales in the United States last week. It predicts that total US tablet sales will reach 195 million by 2015.

Mashable wrote about it here: mashable.com/2011/01/05/forrester-tablet-sales