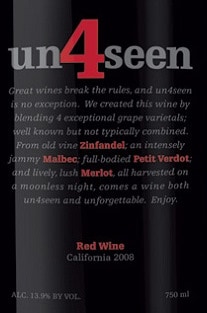 Here’s an unlikely blend from Lodi: Zinfandel, Malbec, Merlot, and Petit Verdot. I’d say put that in your pipe and smoke it, but you’d likely get such an acute rush of fruit to the temporal lobe that you instead might as well do what I did with this sample: twist the cap and let breathe… a while.

The wine in question is the 2008 un4seen Red Wine from California (Lodi, Clarksburg). Released over the summer the idea here is that great wines “break the rules.” Kudos for the innovation. The name — un4seen? — not so much.

I’m not so sure the wine is an entire success in achieving the “unforeseen layers” that winemaker David Akiyoshi seeks to playfully reveal, but for $10.99 it’s a fair price. Comparing it to similar reds is a bit of a challenge given its unorthodox blend.

I’m not sure of the proportions as neither the tasting notes or press release specify the percentages of each grape used. Admittedly, Zin is not my favorite grape. I find it too jammy too often, resulting in a wine experience closer to juice, than the rich, layered feel you might get from a fine Pinot from Carneros or a lush Cab from Napa. So the idea here, with un4seen, of adding Malbec, Merlot and Petite Verdot is interesting, and certainly unique. But mostly I was tasting the Zin component here which was definitely berry city. I would like a little more spice here.

Can the sum be greater than the parts?

Sometimes. If you’re at a noisy party, un4seen — despite its namesake — is likely to be the noisiest of all. Big and bold, you can’t miss this guy. He might drive an exotic sports car and break all the rules, but he’s otherwise quite ordinary, if not easy drinking (but let it breathe!)