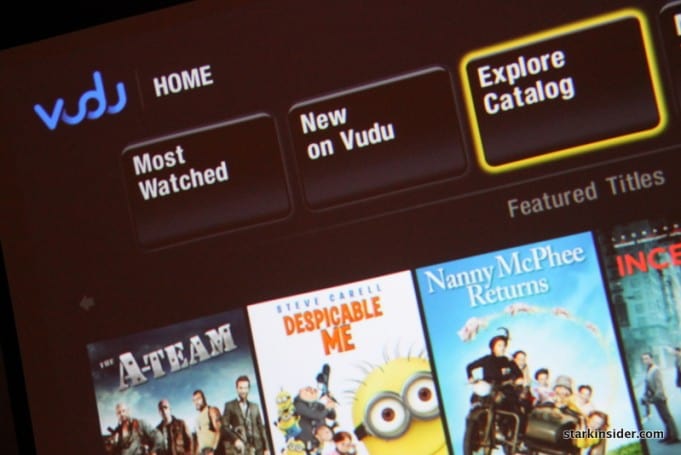 4.5 out of 5 stars - 'Right on the Money'
PROS
+
Fast visual interface with plenty of eye-candy, detailed movie information, 1080p streaming with 5.1 Dolby Digital Plus sound, movies available same day as DVD, competitive prices (starting rental $3.99 for SD / $4.99 for HD).
CONS
–
Pay as you go can add-up making competitors such as Netflix potentially more attractive depending on your buying behavior.
VERDICT:
"Right on the Money"
Yet one more reason to ditch your cable or satellite provider. 1080p streaming with Dolby Digital Plus 5.1 surround and a slick interface seal the deal.
Review by Clinton Stark 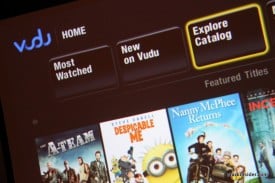 So long Blu-Ray, it was nice knowing you. Comcast, Dish Network, and DIRECTV: time to look for a new industry.

Vudu, another in a growing list of streaming movie services to hit the PS3 is a hit (note: it’s also available in several dedicated DVD players as well as on your PC/Mac via Boxee). I hate to use the expression “game changer” because it alone is really not, but the collective movement — Hulu, Netflix, plus Roku, Apple TV and others — means 2010 will go down as the year we finally were able to toss out our exorbitant cable bills; the only catch being local news and sports… for now.

Currently, the service offers 3,000 on-demand HD movies, and a total catalog of 15,000 instantly available titles. New movies are made available the same day as their DVD counterparts. One surprise: that the Vudu app would even be approved by Sony, who already offers a built-in on-demand service via the PlayStation Network. Perhaps a licensing deal or some sort of per unit royalty is part of the contract, I’m not sure.

Vudu installs as an app on the PS3 in mere seconds. Once you click on the icon, you are in essence walking a virtual BlockBuster, sans the blue-shirted slackers (who now work at Best Buy).

The interface is quick, and heavy on graphics and eye candy, important features for mainstream consumers. Unlike Netflix and Hulu, Vudu (did they just give up and change two letters from a competitor’s name?) is an on-demand service. There are no monthly fees. You just pay for what you watch, just like the aforementioned corner video store of yesteryear. 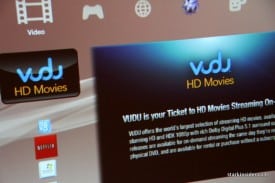 Most films are available in three resolutions: HDX/1080p, HD/720p and SD/420p. Rental prices, respectively: $5.99, $4.99, $3.99. Quite reasonable in my opinion. No driving, no lineups and no greasy, stained blue carpets to contend with here. Another plus: most of the new titles offer Dolby Digital Plus 5.1 surround sound. So the net of it is you’re getting a cinematic experience without the hassles of a DVD or Blu-Ray disc.

I particularly like the detailed information that Vudu provides. When I clicked on Knight and Day (Tom Cruise, Cameron Diaz), a film I had never heard of before, I could see it had a rating of 52% from Rotten Tomatoes and a 3.8 star community score. Also by scrolling down with the PlayStation controller, I could access more information including: cast & crew, reviews, summary, more info, and, even, Wikipedia. It’s significantly more in-depth than what Netflix offers.

Many films have a “free preview” option which gives you a decent amount of time to see if you want to buy or rent the film. 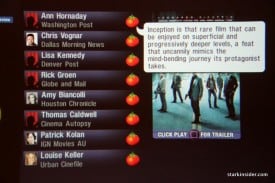 Once a movie is playing you can pause it (although instead of the “X” to pause you push the square button). Useful thumbnails enable you to skip ahead as desired, and the shoulder buttons to skip by chapter and fast forward/rewind. All-in-all, a simple and easy-to-use navigation system.

Performance is exactly as expected. The days of stuttering video and under-performing networks are behind us (pretty much). Of course, this will depend on your particular home network. A built-in test will verify the highest resolution capable of being delivered. After about 30 seconds it told me I could stream up to HDX, or 1080p. I suspect most households with reasonably fast connections will get the same result.

I watched a preview for Mad Max that streamed without a hiccup, but looked dated. After about two minutes, Vudu asked if I was interested in renting it for $5.99. I quickly cancelled the window. I’ve seen enough Mel Gibson already this year. 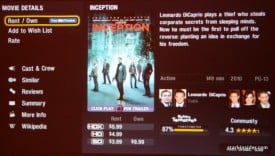 Although there is no monthly fee for Vudu, if you provide your email address when you first launch the app, you’ll be given a $5.99 credit which will cover an HD rental.

While Netflix offers an all-you-can-stream model for only $7.99 per month, the selection is thin by comparison (but still decent). Videodrome, the classic Cronenberg picture starring a confused James Woods stumbling around the streets of Toronto at night, for example, is readily available (in HD!) on Vudu, but only available via old school DVD on Netflix.

Browsing options are extensive. You can sort by rating, title, genre, and more. Chances are, you’ll find something you’ll like.

One thing lacking is a recommendation engine. For better or worse, Netflix will learn what you like (a la Amazon) and offer recommendations. Browsing the Vudu web site is not as engrossing or interesting as Netflix, for example. However, what it lacks in web presence it more than makes up for with one of the slickest and fun interfaces to use on the PS3. Vudu flat out works as promised. Ah, what glorious HD times we’re living in.