4 out of 5 stars - 'Smashing'
HP Pavilion, San Jose
Directed and choreographed by Linda Haberman
Costumes by Vincente Minnelli ("Meet Me in St. Louis," "An American in Paris")
Review by Clinton Stark

Spectacular it was. The Rockettes were in town over the weekend to kick off the holiday season in style with the touring Radio City Christmas Spectacular. The San Jose HP Pavilion crowd which included more than a few wide-eyed children were treated to a classic, high-spirited 90-minute show that showcased the best of New York and Christmas tradition.

During an energetic capstone mid-way through I experienced what life surely must be like in a snow-globe. Canons blasted confetti and streamers over us happy clams seated on the arena floor. It showered down as music, lights and singing dazzled the senses. Just when I thought calm had returned, the canons blasted us again; a second time, a third time… Boom – Boom. And the Pavilion again was awash in a virtual snow storm. It was magical. (trivia: 3,300 pounds of “snow” will fall upon the audience during the 19-city run).

Despite the whiz-bang effects, however, The Rockettes are the real stars. Lest you think this show is just a bunch of repetitive line dancing, you be wrong, Ebenezer. Both my date for the night, doe-eyed wife Loni, and I were surprised at the variety of arrangements and dance styles: Raggedy Anne, Toy Soldiers, Nutcracker (with bears!), and, of course, the fabulous kicking Rockettes glitter line we’ve all come to adore (for 75 years!).

Santa Claus plays host, and does well although I wondered if perhaps he was a little too trim. He could use a few extra Tuna melts or Polish foot longs. Still, who better to work a crowd than old St. Nick himself?

“New York at Christmas” in particular was a stunning visual and aural spectacle (Hello, GAP?). A tour bus takes us around NYC, visiting famous landmarks including the Empire State Building, the Statue of Liberty and Times Square. Legs — I was paying close attention — come flying out of the bus windows as the women sing and dance their way through-out the infectious number.

One nit is the nativity scene which feels completely out of place (although a fixture of the show since 1933). It feels shoe-horned into a production that is otherwise about glitter, dancing and glossy celebration of the holiday season. I can appreciate the effort to include the “stirring communal celebration,” however it felt like a bit of a sponsored message, you know, brought to us by Santa, Jesus and the three Kings.

Speaking of sponsorship, Macy’s works it advertising magic on some clever product placements.

There’s a reason why The Rockettes — and in particular this Radio City Christmas Spectacular — have been entertaining America since 1925 when they first kicked to life as the “Missouri Rockets.” And the evidence was on glorious display at the HP Pavilion over the weekend. The show now heads to Boise, then Portland, and other cities over the coming weeks. It’s a wonderful celebration of tradition, and is a perfect family outing… just be ready to experience life in a snow-globe. 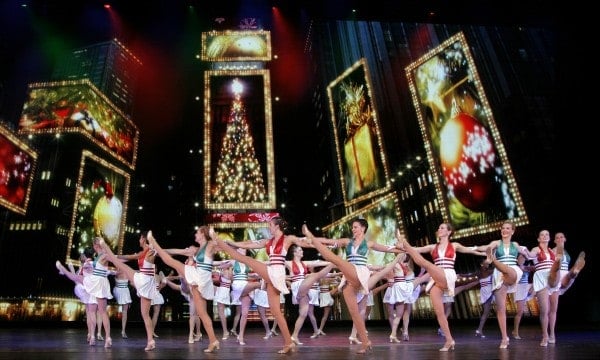