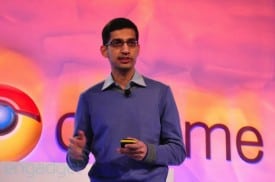 It’s semi-official. Today the operating system war that has been somewhat dormant over the past few years has almost opened a new chapter. When that day comes in 2011 when Chrome OS finally ships the title will be: “Watch out, here comes Google.”

Admist much speculation (through most of 2010 actually) Google still could not deliver its much promised operating system, Google Chrome OS.

Nothing but the web.

Instead we got a preview, a compelling preview no less, but still no Chrome OS devices will be under the Christmas tree this year.

Based on its fast growing (120 million users or 1 in 3 Internet users) and fast performing (“16x faster than Microsoft’s Internet Explorer”) Chrome web browser, the new OS was previewed at a Google press event in San Francisco that marked the second day of big announcements (Android 2.3/Gingerbread, Nexus S smartphone, Honeycomb-based tablets) for the Mountain View kingpin.

In addition, the company announced — surprise, surprise — the Chrome Web Store where apps can be downloaded. Marc Frons, CTO of New York Times, demonstrated a NYT app that provides a slick way to navigate the digital newspaper; a definite shot across the bow of Apple and iPad.

What is Chrome OS?

It’s Google’s mobile operating system of the future. Unlike Apple OS X and Microsoft Windows, Chrome OS is built from the ground-up for the cloud and netbook-type devices specifically.

There was a reason why the announcement today focused so much on the Chrome web browser (most notably its speed and the new app store): Most of what you’ll see in Chrome OS looks a lot like the web browser, which makes a lot of sense given most of us today probably spend the majority of our computing time using sites like Facebook, Twitter, Google, Gmail, etc.

The demonstration today highlighted the ease-of-use when it comes to installing the OS, something that Windows users have complained about in the past. In four steps, Google VP of Product Management Sundar Pichai was able to get up and running: Select network, Accept agreement; Sign in; and (of course!) Take your account picture.

A partnership with Verizon will provide a variety of plans starting at $9.99 that will enable Chrome OS powered devices (presumably netbooks/notebooks) to be connected on-the-go. 100MB of data will be free each month of a two year plan.

For now this is all beta. Developers can sign up for the Chrome OS pilot program.

With cloud computing, the advent of Web 2.0/Ajax (2008), and consumer’s increasing acceptance of storing personal information in places other than their laptop or desktop, Chrome OS could be landing at the perfect time — if, of course, it ships soon.

Little innovation has come out of Redmond, although Windows 7 is a robust, reliable and well selling platform. Apple is becoming the real force in mobile computing with its runaway hit iPad, plus an operating system strategy that syncs content and makes it easy for consumers to move from device to device — all anchored by iTunes, a force that has turned an industry or two on its collective ear.

It would be naive to think that Chrome OS will knock off Windows 7 or iOS anytime soon, if ever, especially since its real focus are modestly powered netbooks.

But that Google is moving into the operating system game forever changes the landscape and the future of computing.

Remember this is a company that iterates rapidly, improving until it gets the formula right. We saw it with Android 1.0, which in 2008 appeared to be a rough computing project that doesn’t nearly resemble the slick consumer OS we see on hundreds of consumer devices today.

With Nexus S, Google will likely hit paydirt the second time around, thanks to its never-ending quest to learn from past mistakes, to innovate, and to compete relentlessly.

So too I see Chrome OS. 1.0 will wake up the industry. But watch out for 2.0, the one that will steal market share, and sales from the competition.

Initially, here’s my guess at what Chrome OS could eventually deliver and possible reaction (or lack thereof):

For now, wait and see, and enjoy Chrome 8 which is proving to be the best darn Internet browser out there today.