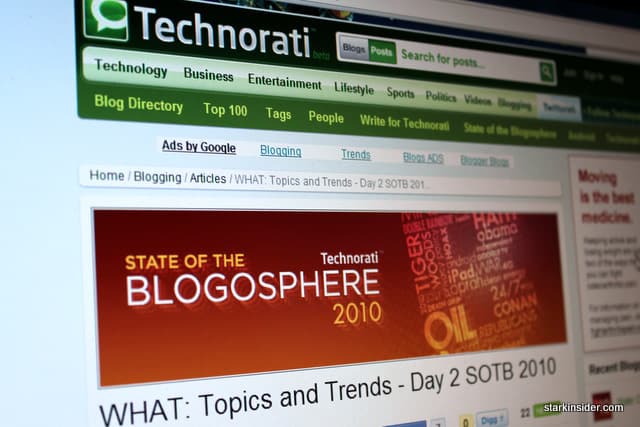 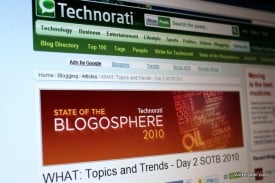 According to Technorati, the number one reason bloggers use Twitter is to promote their blog. Research, that pesky little annoyance, comes in at number seven. It’s day 2 of the annual State of the Blogosphere report, the most comprehensive that I know of concering the whys, the whos and the whats of blogging.

It’s a must read for those of us that just can’t get enough information and insights about the fundamental transformation now taking place in the world of media, notably publishing and journalism.

In case you missed it, the introduction and opening bits were published yesterday, and I weighed in with some of my thoughts (State of the Blogosphere – influence of blogs grows).

Once again, I highly recommend you read through the full report over at Technorati… but first grab a double espresso, shut off Tweetdeck, and put on noise cancelling headphones. You will most definitely be drowning in scads of data, and charts.

A lot of the data simply reaffirms what we know. For example, bloggers are more likely to use Twitter and Facebook. But there are some interesting findings. Here’s my short-take on some of the key points that tickled my fancy, or at least jiggered some neurons.

Why do you Blog?

Although, neck and neck was the ability to connect with other like-minded people. Ironically one of the premises of social networking is to broaden our circles, to connect us, for instance, with that guy in Madagascar who also likes Russian River Pinot. But being humans, we’ve discovered that we flock to those that are like us. Why? Because it easy and comfortable. So wine blogs tend to attract wine bloggers. Wow, I know, revelation. Ditto for food. Small communities form, and the rest is social ga-ga. Oh, and making money… second last on the list. Note: Results do not include Arianna Huffington.

In keeping with the theme of limited revenue opportunities, “personal satisfaction” was cited as the #1 measure for success.

I will blog more. Promise.

On the to-do list, bloggers promise to blog more. Or at least they say they will. Talk is cheap mes amis… but time will tell. I think the notion is a good one. The more you write, the better you’ll get – in theory. If only it weren’t for those time sinks like Twitter, Facebook and TMZ. Also, if you have any inkling of being in the top 100 blogs (rarefied air that includes Mashable, TechCrunch, The Huffington Post) you will need to post upwards of 20, 30, even 40 times per day. Did I mention these are not one-person operations? Then again, there are other ways to rise above the ranks. Look at Seth Godin, for example – intelligent, pithy and insightful… I have so much to learn.

I completely agree with this one. If you want to increase your profile in a given industry, then blog. Just try to keep your South Park anecdotes and Mardi Gras photos to a minimum.

I’m guilty as charged. So are you apparently (it’s the #1 reason why Bloggers use Twitter according to the report). I use Twitter as much to catch trends, breaking news and tech trivia, as I do to promote something like Stark Insider. Sure I share links, engage in conversation occasionally. But it’s all a thin veil to expand a vast west coast blogging empire, 140-characters at a time. Your mileage may vary.