It consistently amazes me how actors memorize lines; given his character juggling in Palomino, it was just one of the many questions that immediately came to mind when David — who writes, directs and stars — agreed to an interview with Stark Insider.

I was especially pleased to learn that I’m not alone when it comes to talking to myself.

David Cale is best known for his solo works Somebody Else’s House, Deep in a Dream of You, Smooch Music, The Redthroats, and the OBIE-winning Lillian. As an actor, he recently appeared opposite Ryan Gosling and David Morse in the film The Slaughter Rule, on Broadway in The Threepenny Opera, and most recently Off-Broadway in Mouth to Mouth, and will appear with Bernadette Peters in the upcoming film Coming Up Roses.

STARK INSIDER: Palomino is about a Central Park carriage driver that dreams of writing a novel. Women then become an integral part of the story. It certainly sounds unique! What can theater goers expect from this production?

DAVID CALE: Well it’s the story of a charismatic Irish guy who, while driving a carriage in New York’s Central Park, gets an offer to moonlight as an escort for women, which he accepts thinking it will be the perfect subject for a novel. The story is told from his perspective and four of the women he becomes involved with. I’m hoping the show’s a story that transports you out of the room and is emotionally resonant, and a little akin to experiencing a movie on stage, and of course something not quite like anything you’ve seen before, and I hope it’s a sexy show that makes the audience feel sexy.

You play all seven characters. What is it like to rehearse with yourself, and how on earth do you manage all the roles?

It’s a little schizophrenic, and involves a lot of self-discipline. I talk to myself a lot. The women in the show are the biggest challenge. Two of them in particular. I don’t want them to become the same person. If I feel that’s in danger of happening, I’ll improvise them having a conversation with each other. 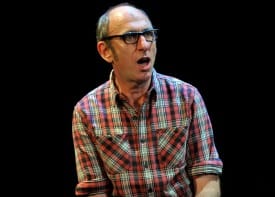 In a recent interview, you call each performance “a living thing” that can “shift” depending on audience reaction. What do you mean by that? Are there unscripted and improvised elements to the play?

I want to have each person in the show be telling their story to the audience fresh each night. Though the script is the same, the telling of it shifts. As the personality of the audience changes night by night different things are accentuated or percolate differently. Sometimes the humor in the show becomes more pronounced and the show gets funnier, sometimes stretches become more emotional. Occasionally I’ll leave the script if something happens in the house. The audience applauded after one of the sex scenes in the show the other night, and Vallie, one of the women in the show who was telling the story, had to comment to the audience about their response.

Did you reach out to real carriage drivers as part of research for the part? And if so, is this secret world of perched gigolos at all real?

No, I hung out around the carriage drivers in New York’s Central Park a little bit and got a sense of the world, and I had driven a carriage for a month in Chicago when I played a carriage driver in Brigid Murphy’s film, ‘A Prince in the Projects’. A friend of mine, who I’d forgotten was a Central Park carriage driver for five years in the 80s, saw the show earlier this year in Culver City and said the show was authentic. The gigolo part is not real, that I know of. Though I’m sure there are escorts with more than one job. 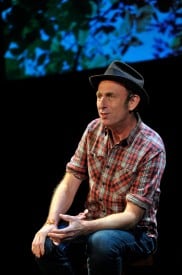 In the Palomino program notes by Kristin Friedrich, you allude to being hemmed in by the constraints of PG-13 radio. How has the stage allowed you to tell this story?

I can get more sexually explicit than I could when I wrote the first section of the show for NPR’s ‘The Next Big Thing’. On stage I can say ‘f@ck’, and not get edited, and Kieren, my lead guy, says ‘f@ck’ and ‘f@cking’. It’s just how he speaks. But in a nutshell, on stage I can have the characters get into bed together, as opposed to just walking into the bedroom together, as they would on the radio. Though I must say the PG – 13 constraints were valuable. They forced me to become more imaginative in alluding to what happens rather than spelling it out, which can actually be sexier, and I think it’s good sometimes if the audience can fill in the blanks with their own imagination.

What are you working on next?

A solo show with a lot of sea shanties in it.

As always the Stark 3 … what is your favorite:

Thank you David for spending time with Stark Insider.

The San Francisco Chronicle declared David Cale “a spellbinder,” noting that as “fascinating as he is to watch, and exquisite as his verbal imagery can be, it is Cale’s gifts as a storyteller that hold an audience rapt.” In Palomino, a beautifully-realized play written for one actor, Cale inhabits seven different characters of both genders to tell the story of Kieren McGrath, a handsome, literate, Central Park carriage driver who dreams of writing a great novel. When he is offered the opportunity to become an escort to a number of lonely, wealthy women, he believes he has finally found his subject. Or has he?

Tuesday at 7pm; Wednesday through Saturday at 8pm; Sunday at 2pm and 7pm