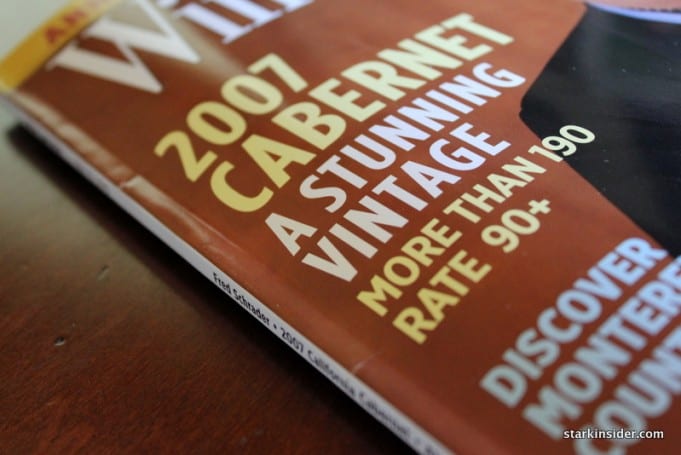 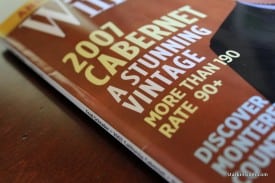 Just like the Great One himself, according to Wine Spectator the 2007 Cabernet vintage wears a 99 — at least if we’re talking about Napa. And aren’t we always when it comes to big bold Cabs?

“More great Cabernets were made in Napa in 2007 than at any other time or place in California history,” writes James Laube in November’s feature.

The most recent issue of the venerable wine magazine hit my doorstep yesterday (you read that right: not on the Kindle or iPad, folks) and reminds me once again why sometimes print is sometimes still worth celebrating. Reading Spectator is a bit like indulging in some Harlan; it’s big, juicy, and glossy. It’s a welcome escape. I’m not so sure the experience would be the same on the iPad — although maybe with Wired-like whiz-bang features I suppose it could actually be better.

When the annual California Cab issue comes out I immediately skim through it. I want to know how our cellar rats fare. Are any in the top 10? How did Harlan do? Etude? Silver Oak? Inquiring minds must know! I’ll admit more than a being a bit of fanboy for all things Napa. Living here now for twelve years makes me feel a certain amount of hometown pride.

Like baseball, these roundups of stats and profiles connect in different ways. Loni has an eye towards valuation. I have mine towards score, and age-ability. So I suppose between the two of us we’d almost add up to a normal person — almost. 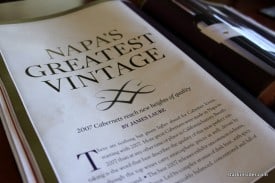 A quick aside on scores. For me at least, WS continues to be “it.” Despite the noise you hear, the occasional dust up in the blogosphere and the little puppy dog bloggers bouncing up and down highway 29, James Laube is “it” (and, of course, Robert Parker as well) when it comes to scoring Cabs.

To be clear, it’s not that blogs and new media don’t have influence. They do. The future is clearly ours for the taking.

But there are two factors that someone like Laube brings to the table in Gretzky-like proportions: experience and pedigree.

For those reasons, I put lock and stock in his opinion. It’s not that others don’t count, of couse they do. But I find it more than a little presumptuous some of the let’s pour scalding oil on the old media curmudgeons attitude that unnecessarily pervades some of the younger wine writers out there. Often it comes across as naive (maybe I too have ventured into that territory once too often), not revolutionary. To those that decry the need for scores, I partially agree. How do you quantify taste and personal preference? Then again, America’s favorite past time is all about the numbers. Titles and badges are nice, but in the end it’s the numbers that tell the story and define a place in history. Lady Bing is nice on Gretzky, but the numbers tell the story: 894 (most goals), 1,963 (most assists), 12 seasons with 40-or-more goals, the longest point scoring streak at 51 games, plus 56 other records. 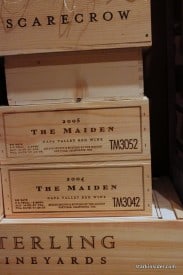 Schrader Cellars continues to rock the wine world. They took the top four spots with two perfect scores of 100 and two scores of 99 for their 2007 cabs. I’ve never had Schrader, so I can only imagine what’s in store the day that I get a chance. The only 100-point wine I’ve ever tasted was a wine by Cardinale. Well respected wine writer Steve Heimoff of Wine Enthusiast awarded the score, and I had a chance to taste it at Toast of the Town earlier this year.

Screaming Eagle, the Avatar of wine, apparently also delivers the goods, with a score of 98-points for their Oakville 2007. Again, a wine I have yet to taste.

Scarecrow, one of our cellar babies, rang in with 97-points which is pleasing considering its price tag. But, I wonder, when will we ever crack it open. Probably at least five to ten years from now.

Caymus, another of our favorites (and at $130 a relative bargain compared to this pricey lot) came in at 96-points. “A firm, ripe, muscular wine..” 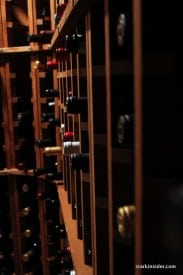 Harlan also came in with 96-points, but at $500 won’t necessarily win the PQR prize anytime soon.

For those of us that like to enjoy a daily and weekly Cab without arranging off-shore micro-financing, then there are 23 value picks, of which all except two are under $40. Not bad.

Crossing over to Sonoma County, the vintage for Cabs, as it is for other years is far less impressive. It typically will cost between 10 and 12-points, kind of like the temperature difference between San Francisco and San Jose. For Sonoma, I’d suggest thinking Pinot or Chardonnay.

Scanning the back section of Spectator, it’s not hard to realize that we’re in a golden age of sorts. The quality of wine is spectacularly high. It seems new world wine makers have figured this thing out. No longer rarified air, more than 190 wines received scores of 90-points or more.

Increasingly choice is more about preference, and less about finding a good wine.

Do you prefer Burgundies? Or big bold Napa Cabs? Or do you like the earthiness and farm-like qualities typically associated with Pinots? If you’re big on tannins and the grill, then maybe you’re a Zin fan. And let’s not even get into terroir, we could be here for ages talking about style and nuance — then again, that’s part of the thrill and conversational qualities that wine can bring to our lives.

Wine prices, just like Hollywood salaries and just about every other industry under the sun save for the Apple juggernaut, have been hit hard. Fortunately, the quality has not been (2010 notwithstanding…?). Tonight, maybe I’ll take a break from my regularly scheduled Artesa or Peju and head into the cellar for something a little more decadent. That secret would stay just between me and GrapeStories; Loni is all about the collecting, not so much the tasting part that I’m all to eager to practice daily.

Parting thought: is it just me or could Wine Spectator use a splash of sex appeal? I don’t necessarily mean airbrushed FHM or Stuff spreads, but there must be at least a few decent looking tasting room babes out there, no? Maybe it’s just me…