“The fish don’t jump into the boat.” That’s one of the first things I think of when it comes to film director Jeffrey Goodman. Here’s someone whose creativity and film sensibility is only matched by his hustle and passion. And when he used that expression last time we met in San Jose — paraphrasing a friend who mentored him on the indie film financing process — I realized: this guy works really hard and loves what he does. To be successful in film there really is no other way.

Join me in a very special Stark Insider episode with film director Jeffrey Goodman as we discuss the film business, financing, scripts, distribution and channeling inspiration:

I first met Jeffrey on a sleepy Sunday morning at the Camera Cinema in San Jose. We had just watched a screening of his first feature, The Last Lullaby. Co-written by Max Allan Collins (Road to Perdition), it’s a gritty film that honors noires of the past, but instills a contemporary dose of crime drama. It doesn’t hurt that Tom Sizemore turns in a stellar performance as a hitman trying to come to terms with the idea of “retirement.”

In many ways Lullaby is the anti-thesis of current Hollywood. It’s a patient film — brooding and at times introspective; the rip-roaring opening and spontaneous violence, though, bring harsh reality to superficial domestic affairs. In his performance, Sizemore reverberates Tony Soprano-like vulnerability. We want the guy to persevere.

At the intersection of film and social media you’ll find Jeffrey Goodman. A quick search on Facebook, Twitter and Google yields results that include film trivia, updates of financing, insights into the production process, and war stories about getting a film distributed. The transparency that he affords us fans and film aficionados is unprecedented, and (at least in my view) a harbinger of things to come with respect to making movies. 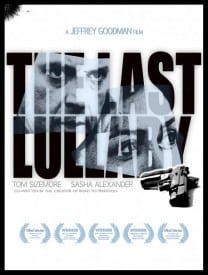