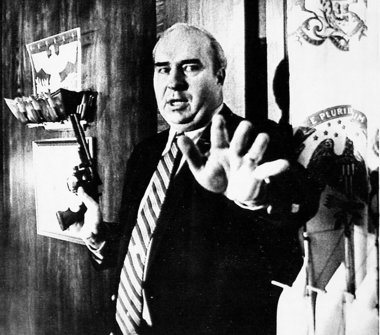 On January 22, 1987 during a live televised press conference, Pennsylvania politician R. Budd Dwyer pulled out a .357 Magnum, and as astonished onlookers shouted “Don’t do it Budd!” shot himself in front of the world.

Shock would be a bit of an understatement to describe the ensuing reaction by those gathered in the small room expecting to hear an announcement concerning his resignation from office. Indicted in a bribery scandal, the embattled treasurer had spent the last few years of his life fiercely proclaiming his innocence. A lifelong politician with aspirations for higher office — possibly Governor, even some day President — his world had come crashing down.

In the aftermath, we’re left with many unanswered questions. How did the life of a respected and admired figure (an “honest, hard-working man” as the filmmakers describe him) come to such a tragic end? Does the legal system, at least in the cutthroat world of 1980s politics, unfairly presume guilt? And what, if anything, can we learn from the story of R. Budd Dwyer?

The filmmakers sent me a screener of Honest Man: The Life of R. Budd Dwyer, a documentary four years in the making, and first feature by Eighty Four Films, an independent production company based in San Francisco. The film left an indellible mark on this viewer. In 1987, I had no idea who Budd Dwyer was. My life then was about live music, parties, and skinny leather ties; I was in first year university and more interested in Level 42 then politics. But if the filmmakers mission here is to awaken awareness about this sad tale, then they’re well on their way.

During the opening we see some grainy television footage of a gun being waved wildly by an obviously agitated, unhinged man. It’s a small glimpse of the surreal drama to come. The story is then told in traditional documentary flashback format with a collection of talking heads including Dwyer’s family (widow, and children), friends, colleagues and even an interview with William Smith, the man whose testimony convicted Dwyer. We learn about Dwyer’s childhood, his early success in politics, and his aspirations.

“Don’t you forget you have a breaking point. Everyone does.”

It all of course leads to that fateful January day.

A complicated bribery scandal involving a computer company called CTA spiraled out of control, until Dwyer’s character and name had all but been crushed. The pressure to resign mounted, and only a legal loophole enabled him to continue to hold office. It was assumed the hasty press conference he called with “further information” surrounding the case would in fact lead to his resignation. Instead, he fidgeted, read a rambling statement, then stopped midway through. He called to his assistants, handing each one of three envelopes. One contained a suicide note for his wife. Another, an organ donor card. And the third contained a letter to Pennsylvania Governor Robert P. Casey. He then frantically grabbed a large manila envelope, pulling out a menacing .357 Magnum.

At that point press began to scramble, some fleeing the room, others shouting out “Budd! Don’t do it!” Before placing the gun in his mouth, Dwyrer uttered his final words, “It’s too late for me.”

Given the title of the film, Honest Man, I assume part of the intent is to shed light on a legal system that presumes guilt instead of innocence, at least in the case of Budd Dwyer. We’ll never know for sure if he was in fact guilty. I don’t know that it’s exactly black and white, and agree with a statement in the documentary that suggests he probably wasn’t completely innocent; in my view, this is about shades of grey. But to his dying day, Dwyer was adamant about his innocence, defending himself and family, ultimately to the point of madness. And suicide is exactly that — an insane act. Thoughtless. So it’s hard to empathize with a man who leaves his wife and children behind; few of us, however, will ever know the pressure faced from such scrutiny, a life destroyed by endless accusation. Some hypothesize that he committed suicide in office so that his family would benefit from the $1M+ insurance settlement that came from dying in office. Regardless, it’s a moot point, and not central to his motivations.

The documentary is well made, and moves briskly, never bogging down in too much detail concerning legalities for example surrounding the bribery case.

Widow Joanne Dwyer (who died in 2009) suggests that the incident wouldn’t have received so much attention if he had merely taken sleeping pills. Daughter Dyan wrestled with guilt for years. If she had only given him that card professing her love that morning, would her father still have gone ahead with the plan?

His son says that his dramatic actions on that day overshadow everything. “Whatever message that had to be said was lost in the act itself.” Indeed, the images of Dwyer holding a .357 Magnum and waving back press are unforgettable.

At times there are one too many close-ups. We could use some breathing space and breaks from the interviews–by the time we get to the final scenes we at least feel less claustrophobic. Fortunately, none of this detracts from the story itself.

Freedom of the press vs. tact.

Since the suicide was caught on camera, there are several gruesome recordings. The media had to decide how much to show in airing the story. Several stopped right before he pulled the trigger. At least one television station showed the whole thing. The documentary mentions that today such an event would be all over YouTube and social media. A viral video ahead of its time. And in fact, the videos are all over YouTube, uncensored, and frightening — it’s the kind of stuff you expect to see in a fictional work.

It’s too late for me.

I knew this was an effective documentary when I found myself, even days later, checking Google for more on the story. I read newspaper clips, archival testimony the filmmakers had assembled on their site, and watched old video footage.

2010 marks the 23rd anniversary of the public suicide of R. Budd Dwyer. Is this a story worth telling? I’m not sure.

It’s hard to make sense of it all, and if there are lessons to be learned in this complicated man’s tragic life, they’re buried in a massive pile of he said/she said. In some ways perhaps the skeletons are best left in the closet. Still, it’s an incredibly riveting documentary, even if the experience left me slightly rattled. And unfortunately, despite the proclamations of innocence, the endless letters of appeal, what we’re left with in the case of R. Budd Dwyer are chilling images, and a sad, inexplicable aftermath.

In the words of director James Dirschberger, who accidentally stumbled upon the suicide video years ago before deciding to make the film, “After the video ends–you know, it’s a relatively short video–I just sat there with my jaw on the floor, like ‘What the hell did I just see?'”