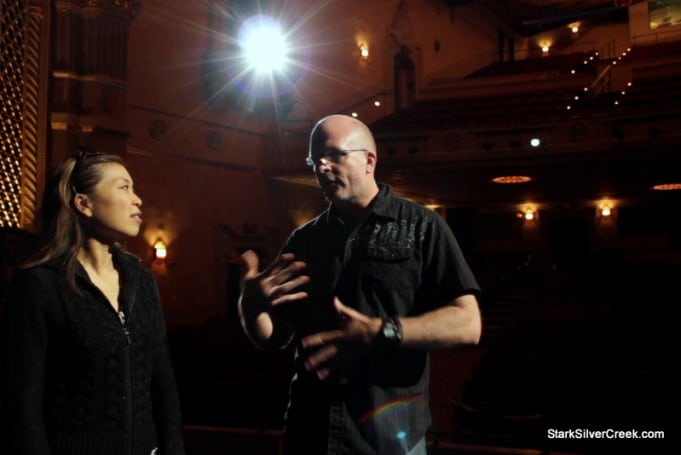 What does backstage look like at a $1M lavish opera production? Find out as Loni of SSC visits the California Theatre for a behind-the-scenes look at the stunning Anna Karenina production now playing at Opera San Jose.

Stage Director Brad Dalton (whom, as he’s tell us, you may or may not have seen in Die Hard) discusses the production, describes what it means to adapt a Tolstoy novel for the stage, and shares some of the adjustments (including a critical, interpolated scene) that breathe contemporary life into the grand staging.

“The feeling is very much a big musical like Les Miserables,” he says. “It’s quite a spectacle.”

And, as always, a mystery video reference: What is Angry Birds, and why is it mentioned?

Sung entirely in English, Karenina may well be the perfect show to attract a new generation of Opera go-er that might otherwise balk at the idea of listening to a few hours of Russian lyrics. Indeed, Dalton suggests that English may have gotten an unfair rap in the world of Opera. “Actually English is a beautiful language to sing in … it’s incredibly visceral and emotional.”

In a rare turn for the world of opera, Dalton was able to work with a living composer which gave him and the team a unique ability to explore the meaning of the score.

“If you’re working with Mozart you can’t talk to him,” he says. “He [composer David Carlson] is here every day to tell us why he wrote what he wrote, and what he feels about the way we’re interpreting it.”

Over the years, we’ve done a lot of interviews here on SSC, and this one with Brad is quite possibly my favorite–even though I’m not by any means an “Opera Guy.”

As soon as I arrived at the backstage entrance to California Theatre to meet the OSJ staff, we knew immediately that this was a different show.

There were busy bodies everywhere! You can see it in this video segment as Loni interviews Brad Dalton during rehearsals. Set pieces were moving in and out; lighting was being tested; conversations were happening everywhere, all around us, constantly. It was a really exciting atmosphere, and reminded me once again of the massive level of effort that goes into making a show appear flawless to the audience. The number of moving parts–costumes, lighting, music, actors, vocals, sets, dancing–is staggering.

As always, be sure to watch through to the end for the STARK 3… Favorite wine or beer? Food? Gadget? Get to know the people making it happen in theater and arts, one spontaneous answer at a time.

Notes on the SSC segment

The non-technically inclined may want to stop reading at this point. For others that frequently ask about our video rig, here’s the short of it: Canon T2i DSLR; Rode Videmic shotgun mic; Audio Technica wireless lavalier mics; Canon EF-S 18-55mm f/3.5-5.6 lens; various filters; 32GB Class 6 SDHC memory. For this one, I didn’t use any external lighting because I like the shadows and the backstage feel that all the existing theater lighting provides. Shadows and Tall Trees. For those that want to get into video, either for their site or as a professional service, the one bit of advice I’d give is: be prepared to block off lots of time. No doubt, budget is important as you’ll need the right gear. But I’ve discovered, at least for us, that in terms of resources time is just as, if not more, important; when it comes to video production, you can never have enough time. You need to get out to location to shoot the footage. Bring it back to the studio, back it up in at least three places. Cut the thing (Premiere Pro). Process sound. Color correct, etc. Encode 720p/1080p versions. Then upload it and wait for final encoding. Beginning to end it’s an untold number of hours. For us, it’s worth the effort mostly, as it’s a a unique way to tell a story, and besides I live for the outtake.