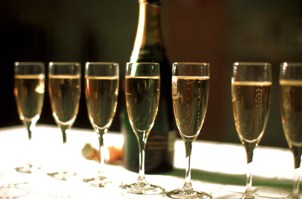 The official 2010 Champagne harvest season begins on September 13th. All grapes will be harvested by hand, according to traditional practices, to select the highest quality grapes.

“Due to a frost that we had earlier in 2010, the development of the grapes was slightly delayed this year,” remarked Champagne Bureau Director Sonia Smith. “Harvests are two to four days behind last year, except one village which began on September 10th. Yet the unseasonably warm and sunny weather in July allowed the grapes to mature quickly. All in all, it is looking to be a promising harvest this year, once again creating a marvelous wine that can only be produced in one place – Champagne, France.”

There are many sparkling wines produced around the world, but the Champagne name can only be used on a label if the grapes and the wines produced, under strict controls, in the French region that bears the name Champagne.

The Champagne region has been producing wine since the Roman era, but only in the traditional Champenoise method for three hundred years. In the eighteenth century, Champagne houses began the harvest traditions which live on today. Each year, grape-pickers come to Champagne to pick grapes by hand, as machines are not allowed for harvesting. The Champagne region’s climate, chalky soil, strict regulations and long history of winemaking combine to produce a sparkling wine that can only be produced in one place: Champagne.

As part of its new “Unmask the Truth” advertising campaign, the Champagne Bureau has launched a petition to end mislabeling in the United States.

The petition is part of the Joint Declaration to Protect Wine Place Names & Origin, a coalition of 15 wine regions from around the world committed to educating the public about the importance of place names. Champagne is a founding signatory and is joined by seven U.S. regions – Napa Valley, Sonoma County, Paso Robles, Oregon, Walla Walla Valley, Washington and Long Island – and seven other international regions – Porto, Jerez, Chianti Classico, Tokaj, Victoria, Western Australia and Rioja.