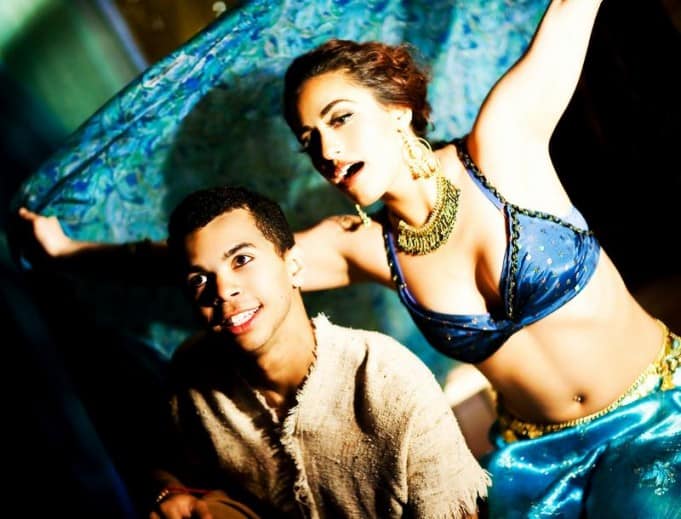 With Aladdin, the Berkeley Playhouse brings a whole new family-friendly world to the Julia Morgan Center. All of the hallmark Disney features are here including singing, dancing, flying and… running. Running through the streets of Agrabah. Running from the palace guards. Running to the market. Running… to stand still. By the end, you half-wonder how the actors have enough energy left to pull-off the Bollywood-inspired dance number that joyously closes the show.

Loni told me later that if parents don’t take their children to see it, then they are: bad parents.

She laughed, but I agree. Berkeley Playhouse has a way of capturing the magic of these productions. We saw it last year with Peter Pan and The Wizard of Oz. Licensed via Music Theatre International (MTI), this version of Aladdin feels just right. The pace is action-packed; before we know it Princess Jasmine has disappeared and everyone including “street rat” Aladdin is searching for her. Musical numbers pepper the proceedings with a digestible combination of spirited dance (the choreography is fun) and singing, that while not always up to the task, brings on the smiles.

For the most part the cast is spot on, with a few minor hiccups here and there. As Aladdin, William Hodgson brings a wide-eyed innocence to the lead. Although I couldn’t help but think he looks like Tiger Woods’ baby brother. Loni disagrees with me on this irrelevant point. Hodgson might have been slightly nervous, but by the end of the show I felt he really hit his stride, and the had the audience totally bought into his adventure against the odds. Jenna Davi is believable as Princess Jasmine, bringing a strikingly exotic look and grace to the role.

The comic duo of Jafar (Anthony Rollins-Mullens) and the parrot Iago (Dan Saski) was clearly a crowd favorite. Their banter was well played, and brought plenty of laughs. Who knew a human could play a parrot so effectively with minimal costume?

Then there was–OMG, LOL–Ted Barton as the Genie. Stop the presses. Hold onto your hats. Stage presence is no stranger to Barton. As soon as he appeared from the lamp amidst smoke and wonder, the zingers came on faster than a Don Rickles comeback special. “Men are from Mars, Genies are from lamps!” Contemporary references including Dick Cheney, Lady GaGa, among others keep the adults engaged while the children are mesmerized, probably wondering how Aladdin will spend his three wishes.

Note the number of costume changes and you’ll realize the amount of effort that goes into the show. And, yes, that would be a magic carpet (Hannah Dworkin), flying across the Julia Morgan Theatre. It’s impossible not to grin foolishly.

Nice touches abound in Aladdin and once again demonstrates Artistic Director Elizabeth McKoy’s attention to detail and passion for staging the best possible show for theater-goers of all ages.

Disney’s Aladdin
Berkeley Playhouse
3.5 out of 5 stars
Julia Morgan Center for the Performing Arts
1.5 hours (including intermission)
Through September 5, 2010
Tickets from $15