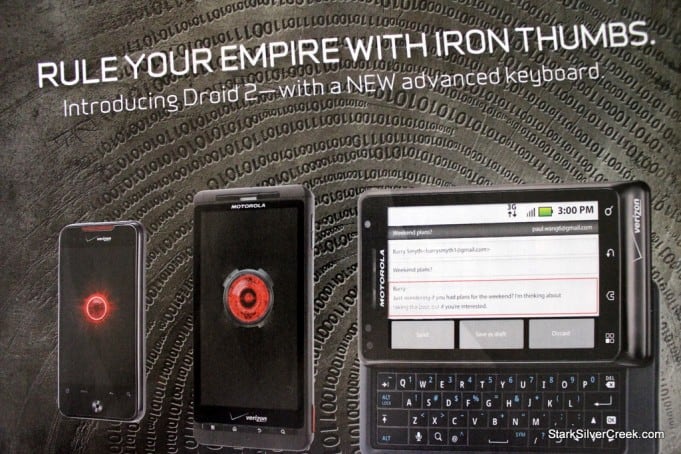 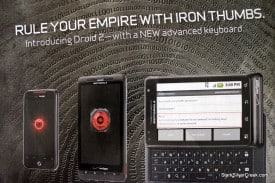 I’m a Droid kind of guy. I picked up the first generation model on launch at a local Verizon store here in San Jose and haven’t looked back. While the new models look enticing, I’m perfectly content to ride out my two-year contract and look forward to all the innovation that should reveal itself in a third-gen model come 2011.

Meantime, though, I’m into all things branding, especially when it comes to tech.

So when Loni shouted to me that there was a cool looking Droid insert in the Sunday Merc (which they were handing out free at the neighborhood grocer), the little kid in me just had to see what was what.

Admittedly my track record for tech predictions this last twelve months has been spotty: iPad dud (way wrong), Nexus One flop (right), Google Android success (right). And although I never wrote about it here on SSC, I always thought the “Droid Does” campaign was ominous and way off the mark.

To me the ads looked dark, techy, foreboding. To my eyes at least it looked suitable for geeky techs; after all, it did rope me in. But what about the mainstream? Ads from Apple, for example, were joyful and pleasant. Droid had robot voices, red on black type and lots of specs. A Silicon Valley rule was never to sell speeds and feeds. But, by all accounts, the “Droid Does” marketing campaing has been a resounding success.

Stand-out from the crowd: Make a bold impression

One thing I missed in my early assessment was the marketing materials’ distinctive quality. It leaves an impression. Whenever you see a Droid ad, it’s immediately recognizable. That’s quite an impressive feat given its short life – recall, the Droid euphoria really began with the large push by Motorola (with partners Google and Verizon) in November 2009.

When I first picked up my phone at Verizon, it said, “D R O I D” as the sales clerk booted it up. He said to me, “Cool, eh!?” I thought, yes I guess. That’s neat… maybe. I don’t know. But I was floored at how easy everything was to setup. I just entered by Gmail credentials and everything synced presto–calendar, contacts, email. Beautiful. Same with Facebook and later Twitter.

Despite the guy-oriented marketing, the Droid has appeared to break-on through. I’ve seen plenty of women of all ages with it – some in pink cases (there should be a rule against that… either that or a court order to return the Droid and order a white iPhone instead). And with sales reportedly at over 160,000 units per day, there’s little worry that Android is not succeeding. It’s a home run.

Strength in numbers: A co-op

One of the really unique elements of the Droid Does campaign is that it does not refer to a specific model or even manufacturer.

Although Motorola did indeed release the first Android 2.0 phone called “Droid” (causing some amount of confusion), it’s been cleverly used to build an umbrella brand. For example, the latest ad (see the images in this article) includes handsets from both HTC and Motorola.

By going open, Google has the advantage of critical mass. That can show itself in many forms, most notable consumer choice and marketing muscle. This strategy helps tremendously when trying to grab market share from market leaders RIM and Apple.

Another neat trick. All phones currently offered (and the Droid 2 is rumored to also come in at the same price this week) are $199 with a two-year Verizon contract. All of them feature Android, so it’s a matter of taste. Do you like a larger screen? A physical keyboard? Do you prefer the Sense UI or stock Android? There’s a model for everyone.

If I were to chose between the three phones seen in the ad here, I’d have a tough time. The HTC Droid Incredible features the Sense UI that everyone raves about. The Droid X by Motorola has a larger screen, while the upcoming Droid 2 features the slide-out keyboard that many love (and that I use on trusty Droid everyday).

While the Nexus One was a mis-step earlier this year by Google (retailing is not its strong suit), Android is a massive success. With market share now around 10% (in the U.S.) the landscape is changing. RIM is demonstrating that they’re not quite ready to play in the consumer market thanks to the solid, but underwhelming Torch smartphone. Innovation, it appears, is the domain of just two: Apple, and Android-powered handsets. Meantime I must get back to ruling my empire with iron thumbs.