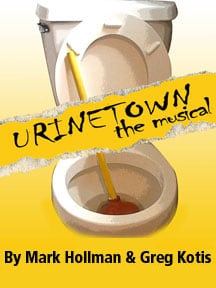 Sometimes you’ve got to fight for your right… to pee. The capitalism run-amok world of Urinetown, The Musical is unlike any you’re likely to see on the stage. Water is in short supply, and the poor must line-up, and pay to use privatized amenities including public restrooms. And here I was thinking this only happened in Maastricht!

Despite 9/11–a tricky time to launch any new production, let alone one with a controversial (and to some, even offensive) title–the 2001 musical won several Tonys (director, original score, book) and was nominated for several more. Last night, the show premiered at the Coastal Rep Theatre in Half Moon Bay in a rousing opening performance and celebration. That the show was so well executed, including the direction, lighting, singing, and acting, is testament to the passion and commitment of a large creative team and cast, with nary an equity performer. It’s a demonstration of community theater exceeding beyond expectations.

The best part of the story is that it eschews the standard pantomime, instead twisting conventions; the Broadway musical itself is even vulnerable to clever satire that skewers everything from privatization of public infrastructure, to socialization and its effects on a resource challenged planet.

But is this a happy musical?

This much I know: there is no such thing as a free pee. At least not in this metaphysical world.

We learn from narrators Officer Lockstock (Diahanna Davidson) and Little Sally (Alanna Pinell), a firecracker of a duo, that, thanks to a 20-year drought, water is in short supply, so the poor must pay by-the-books Penelope Pennywise (Courtney Hatcher) to relieve themselves (“Privilege to Pee”).

An apparently greedy, corrupt corporation, Urine Good Company (UGC), run by shrewd Caldwell Cladwell (Peter K. Owen)–the Howard Hughes of toilets–has seized upon the opportunity to profit from the privatization of the in-demand amenity (“Don’t Be The Bunny”). Revolution, though, is in the works. Soon enough, Bobby Strong (Brendan Quirk) leads an uprising, “Pee for Free!” despite his romantic interest in the bosses’ conflicted daughter, Hope Cladwell (Emma Clark).

There are plenty of nudge-nudge, wink-wink moments as the story unfolds; the audience is in on it too. But the musical is not without a twist or two. Performers are asked to do a lot in this production. The dancing, singing, and acting are, for the most part, solid. Comedic timing is a particular strong suit.

Director Martin Rojas-Dietrich, who we last saw in Dirty Blonde at San Jose Stage, keeps a large cast and busy scenes moving briskly. Thanks to the multi-level set, the stage never feels cluttered. Exuberance is high. It’s hard not to smile and savor the energy that the performers bring to their roles. A live band, tucked in the back corner behind a chain link fence is a real plus. They add pop and give the whole production an infectious beat.

Not everything is perfect. Some of the acting is occasionally spotty with delivery that is less than convincing. Technical glitches caused some of the mics to distort voices, but no more so than you’d witness at many productions across the Bay Area – sometimes it happens when you have so many wireless devices under one roof. Stubborn flashlights challenged actors earlier. But these are all nit-picks.

On this evening, Coastal Rep delighted with a fresh production that was through-and-through triumphant. It’s a real treat for Half Moon Bay residents, and worth the scenic (and short) drive for even jaded San Francisco and South Bay theater-goers looking for a taste of top notch community theater. You’ll be thankful to visit Urinetown, the play; not Urinetown, the place.