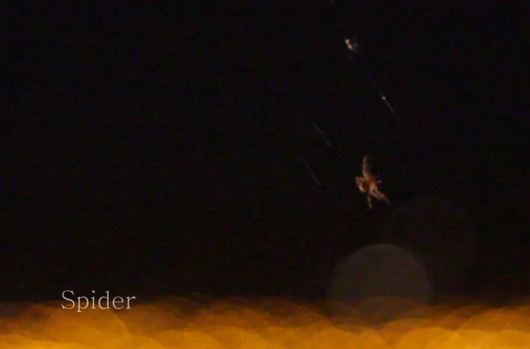 Spider—over San Jose city lights. Someone call Michael Mann! This is Insects and the City. Or how about Urban Wildlife Adventures? I try. Can you tell I look for every excuse to work with the Canon T2i? I’ve decided that this episode completes the epic trilogy, that started last year when I was just a poor sod using a Vixia HD camcorder to capture the baby birds in “Eggs” in a nest in our courtyard. Then in part 2 “Mantis” I had a willing camera-friendly face who put on an entertaining show, climbing over flowers and pretending to fall to the flagstone. What a card. 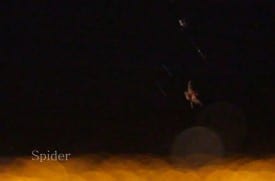 In “Spider” we learn what the Spider-man series might look like without: (a) acting; (b) story; (c) script; (d) strong camera-work; and (d) budget. Yes, you get what you pay for.

The dramatic web—sprawling beautifully in the city lights across our olive tree and over to the flagstone and fence—caught my attention immediately as I was enjoying an evening Cab, and in a flash I was out there with the T2i. 24fps. Check. 1080p. Check. Low light ISO. Check. Let’s go! Sound… well given I was playing with the focus a lot, I simply dubbed over the haunting soundtrack that potentially masks my flaws, and makes the whole thing poignant. In an elevator muzak sort of way.

Unlike the mantis, the spider suffered from stage fright, and refused to do anything remotely interesting for the camera. We won’t be confusing him for Jim Carey or Jack Black anytime soon. My direction did little to improve matters as the bugger resolutely hung there, stone cold, sulky and all. Maybe working with Loni is not so bad after all; be still my beating heart.

The Canon T2i is brilliant. Ask anyone and I can almost guarantee you’ll get the same response. I’m getting better (hopefully) each day with all of the settings, getting to know how it performs in various conditions. For example, I used to shoot with ISO on Auto. I learned quickly, though, that the T2i would use 6400 fairly regularly in low light situations which results in plenty of grain. Now I use manual and try not to go above 1600 although sometimes it unavoidable.

I used two lenses. The kit lens which performs well considering its stock. I like the flexibility of the zoom and wide angle. I have nit picks though. It’s noisy, slow and not so great in low light, which you can see in the video. So for this night time shot I switched to the Canon 50mm f1.8 which does very well in low light. However, you give up zoom control. As a result I don’t get any stellar close-ups in this video. For all we know, this is a plastic spider hanging in the San Jose breeze.

I’ve also realized that I need to expand my lens selection. Of course! Must buy more accessories. I’d like a really fast, zoom (e.g. non-prime) low-light lens. Let the research begin. It would help in some of the night time shoots we do here for SSC. And, after all, that’s what these disposable little vignettes are for, merely practice.

As I was shooting the spider I wondered what kind of shots I could get had I pulled out the FD-EOS converter (read more about my experience using FD lenses on the T2i) and used a super-macro with teleconverter. I’m sure it would’ve resulted in some dramatic close-ups. But the set-up time; too long. Maybe next one I’ll give it a go.

One thing I miss from the Vixia camcorder is the LCD viewfinder that tilts. The Canon T2i has a fixed panel, which means when you’re swinging the camera around it’s not always easy to see your subject. A follow-focus set-up with small LCD monitor would be the solution… in time, in time.

Meantime I leave you with the epic Spider (shot in 24fps / 1080p – of course, is there really any other way?). And I’ve also included the other two videos here. Mantis was also shot with the Canon T2i. While Eggs was shot with the old Canon Vixia HF100 so you can see some of the differences.

I’d relish the thought of capturing a hummingbird with the T2i. But it seems like a long-shot (ha) given the speed with which they dart about.

BTW – this one has a sad ending, at least for the baby birds. We never got to see them mature. A roadrunner, or some other predator, made off with the lot in the middle of the night. I’m guessing if I caught that on video, we’d have a few more views on this one.