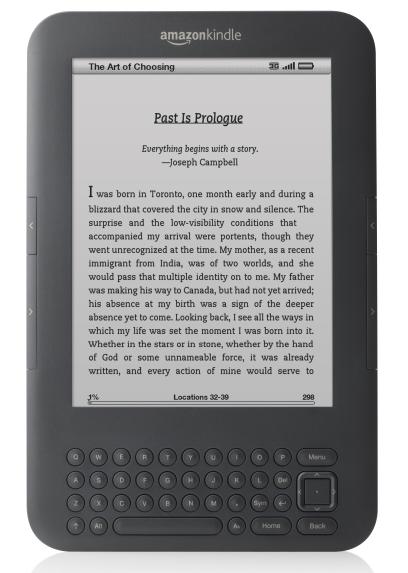 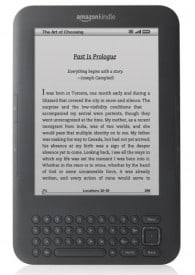 Amazon (AMZN) has proved a worthy competitor in the e-reader space. In fact, they lead the market, with competitors such as Barnes & Noble (Nook) playing catch-up; although perhaps coming on stronger than many analysts first predicted. Kindle can thank first-mover advantage for the head-start.

And while the Apple iPad is far more powerful, providing a deeper set of functions and an unrivaled touch-screen user interface, the Kindle still king when it comes to digitial ink and the “single purpose device” as its been called. A lot of that has to do with the e-ink display which is easy on the eyes for extended periods.

The company could use some good news. The stock (AMZN) is down about 18% so far in 2010, and last quarter disappointed Wall Street.

Still, Amazon CEO Jeff Bezos is upbeat, “I predict we will surpass paperback sales sometime in the next nine to 12 months. Sometime after that, we’ll surpass the combination of paperback and hardcover. It stuns me. People forget that Kindle is only 33 months old.”

A new “mass-market” Kindle launches at the end of next month and starts at only $139. The new model, sporting a 6-inch e-ink display, uses wi-fi with a 3G version available for $189. It also brings a year’s worth of innovation to market: 21% smaller, 15% lighter (8.7 ounces), 20% faster, up to four weeks battery life, and expanded text-to-speech options. Someone call Gordon Moore.

Kindle makes Amazon’s massive library of content available with just a few clicks. It’s unparalleled. For people that read, it’s a compelling proposition. I should note, though, that you can also get this same content on the Apple iPad via the Amazon Kindle app. But starting at $499, you could buy a lot of books, magazines and newspapers with the lower priced Kindle.

People that want color, full-featured web-browsing and incredible magazine apps aren’t about to ditch the iPad anytime soon. But for those that just read books–and like to read outdoors–the Amazon Kindle, at only $139, is enticing.

Eventually I expect these devices to be free, or almost free. The gravy is in the books; just like Apple wants you consuming content from iTunes. Those innocent 99-cent transactions can add up. The more devices, the better. We’ve seen this before with the shaving cartridge model, the toner cartridge model, even the video game system model… it’s all about the add-ons.

I told Loni about the new model. She’s been on the fence for at least a year, reluctantly clinging to her stack of (heavy) books. She finally perked up, “I want one!” Words she’s never used in reference to iPad.

Me? Well both are desirable. But I’m guessing Apple will someday release an iPad wth a hybrid display–surely it’s in the works. Being able to toggle between E-ink and a standard (Retina?) display would be the best of both worlds. When that day comes, I’ll also shout out, “I want one!”