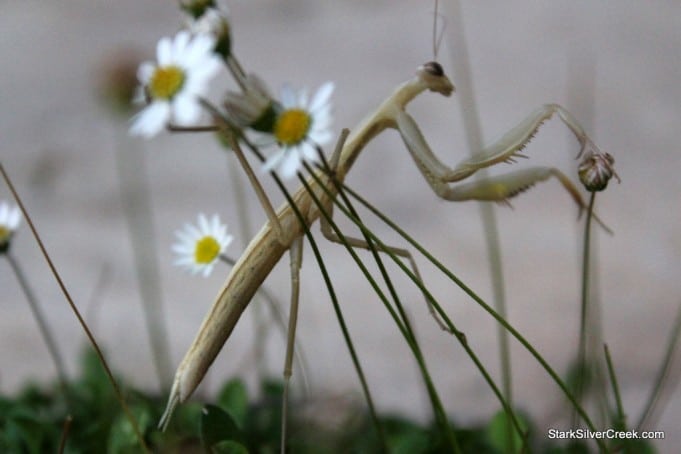 The Praying Mantis is an order of insects that contains approximately 2,200 species in nine families worldwide in temperate and tropical habitats, including this guy spotted here in San Jose. Most surprising to me is its tiny size. As a child, the Mantis was a large, terrifying (and most likely city-destructing) creature that inhabited the darkest parts of our yard. I found its raptorial legs captivating, with their spikes and articulated anatomy. 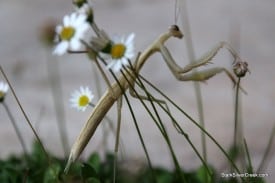 As you’ll see in this video, he definitely kept a compound eye on me, while I maneuvered, awkwardly by comparison to our friend, to get these shots with the Canon T2i. And here I was, enjoying a cool evening with a Chardonnay, catching up on some remaining tidbits of work.

At first it looked like a little stick. But it was moving! I quickly grabbed the T2i and began filming. I found the subject imminiently more co-operative than my normal on-air talent, a certain Loni-dae.

Once again, Wikipedia proves essential. I learn that they are predatory. Insects form the primary diet, but larger species have been known to prey on small lizards, frogs, birds, snakes, fish and even rodents. However, I think the vole that lives somewhere in the space this Mantis is traversing would likely win that battle. Although, I wonder, will the white one seen in this video grow larger, or is this a fully developed adult?

Like their close termite cousins, mantises did not become common and diverse until the early Tertiary period.

I also learned that the Mantis is often used as a form of biological pest control. And that, “tens of thousands of mantis egg cases are sold each year in some garden stores for this purpose.”

So call this an ode to Discovery Channel, or National Geographic. Or maybe just a break from all the Apple tech news and coverage. Or what it really is: another excuse to get the Canon T2i into action.