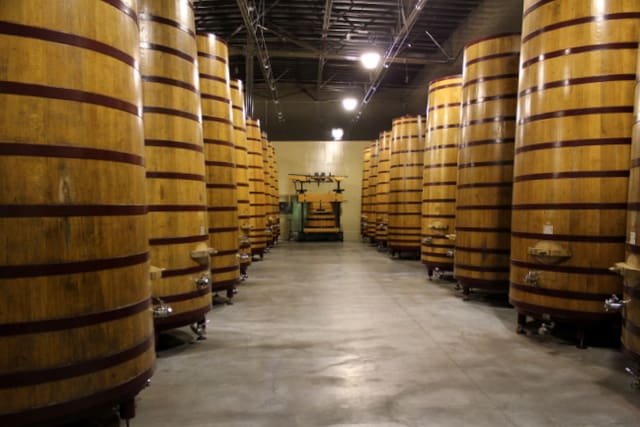 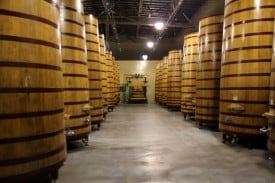 The families gathered this week in Livermore to talk business. The question—can Petite Sirah become the next Pinot Noir?—would be discussed at length amongst the assembled winemakers, marketeers and trade for the better part of a day. At the head of the long table, in a conference room next to the lofty barrel room at Concannon Vineyard, sat The Godfather, Jim Concannon, and his son, John, playing the part of the up-start, savvy Michael Corleone.

Before Dr. Vino (author Tyler Colman) addressed the families, Mr. Concannoon stood and announced, “The best bottle of wine is an empty one.” Here, here! Agreeable nods of approval from those assembled around the room.

Business is challenging, but things are looking up. Still, what to do about that nagging little grape that no one can quite figure out: Petite Sirah. It’s a feisty little bugger. Bold, with plenty of–look at me!–swagger. Sometimes even gaudy; all inky, you know. Ah… Fredo. What to do?

As I sat at the PS (Petite Sirah) – I Love You symposium conference (fortunately, Jo Diaz allowed SSC to “eavesdrop” on the trade-portion of the proceedings) I half-expected FBI agents to swarm the place. Although, befitting the rolling hills and expansive, country terrain, I’d bet they’d roll up in Ford pick-ups, not 1941 Master Deluxe Two-Door Sedans (as perfect as they would look screeching into 4590 Tesla Road).

If a meeting of the minds should take place to discuss Petite Sirah, then it seems so right to be here, at Concannon Vineyard. In 1908, the grape–a popular choice for Burgundy blends–was planted in these very vineyards. In 1961, Jim Concannon released it as the variety “Petite Sirah.”

Fast forward 49 years. Now, in California, there are 126 growers, 723 producers and 849 companies, involved in Peite Sirah. Tell me, who doesn’t love a Batista’s New Year’s party?

Jo Diaz, Executive Director, notes in her report: “Winemakers love to make this wine, to satisfy their own passions…It’s a winemaker’s wine.”

Okay, yes, back to Dr. Vino. He was, after all, the keynote of the day. Before I get to that, may I just add how appropriate it is that he met with John Concannon on a snowy New York evening (“The worst in New York in 2008”) at a lunch to discuss … — this part classified.

I had never watched Tyler Colman give a presentation before, let alone meet the guy in person. I had heard of Dr. Vino, seen his Twitter activity. But this time I would witness his performance in front of 90 people, some who might even be carrying pieces (by that, I mean wine samples).

So what would we learn, and could Petite Sirah indeed become the next Pinot Noir?

First, we’d take in some entertaining case studies. And while they didn’t exactly pertain to wine (as later questioned) I still found them suitable marketing foder for a trade group looking to build momentum around a grape that might be on the verge of greatness.

Yes, flavor of the month; as if we hadn’t seen or heard enough about the former NFL receiver and his macho ways. Tyler tells the family: sales are up 107% since the campaign started during the Super Bowl. Despite the fact, he notes, that Old Spice contains 91 of 92 known carcinogens.

Must we go there — again. Dr. Vino says: the contest generated more buzz than the job itself.

Then, everyone’s favorite topic, what about the future of wine ratings. Will scores still be handed down from high-above?

First, the numbers and some demographics.

There has been 16 years of growth in wine consumption in the US. Each of us drink 3.02 gallons (2009). Some times that might even happen during epic Vegas benders, but for now, let’s just assume that’s the course of a year. Core consumers, however, account for 91% of that. The Millennials (16-33), everyone’s favorite demo., are the fastest growing segment.

And what about those Millennials. To summarize Colman’s points, they:

In his words, “there is a bull market for free content” (true).

Then onto the future of wine criticism:

But, is there “Thunder”?

In other words, is any of the social media having an impact on sales? According to his keynote, it’s hard to say. There’s a lack of evidence. Is a blog, in the words of the popular cartoon, merely “pointless, incessant barking?”

His conclusion: Social Media is only 1 leg of the stool.

And some quick tips to those in the room (and those watching online earlier this week) Dr. Vino concludes:

So there you have it. The family sat, watched, nodded. Times have changed, indeed. Twitter is full of Sonnys — shouting out about this or that.

For me, it was decent-enough. There were no ah-has, or stellar insights, but on this given morning it was an amiable start. The case studies and marketing trends helped level-set for the rest of the day.

Stay tuned for more from the day the families came together at Concannon. What about marketing? Dan Berger and Clark Smith talk about consistency. If we want to be a happy wine-judging family, we need standards, templates! The damn dogs have them. What about us?!

Then there’s enology, viticulture. Topics that will require metaphors, and allegory like nobody’s business to keep anything but the most dedicated of wine enthusiast tuned in. Now, if you’ll excuse me, I must run out to buy some oranges.