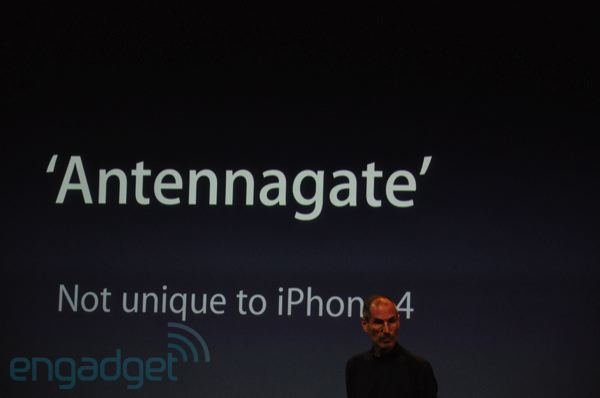 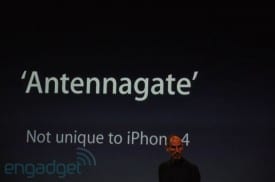 This morning Apple held a surprise press conference at 1 Infinite Loop. Although “Antennagate” was widely believed to be the topic, it wasn’t confirmed until the “antenna song” kicked-off the meeting to muted response. CEO Steve Jobs came out to address a small group of reporters dressed in traditional (but tired) black turtleneck and jeans.

Would Apple fess up, and admit that there was a problem with iPhone 4?

But not without about 20 minutes of chest pumping and reassuring factoids: 3 million iPhone 4 phones sold, $100 million state-of-the-art anechoic test chamber.

Despite the press hoopla, Jobs assured us that the actual number of complaints was tiny. In fact, according AppleCare data, only 0.55% of users have called Apple to report an issue with reception. The AT&T return rates for iPhone 4, at 1.7%, is far less than that of 3GS, 6%,  for the same time period. Further, he went on to say that the new phone also drops less calls than the the previous model. 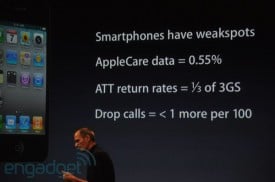 During the Q&A Jobs was asked if Apple would do anything else to rectify the issue, like design a new antenna for instance. He said, “You know, the 3GS has the same problem. We’re getting reports from customers that this is better than the 3GS. So I don’t know changing the antenna design would help — I don’t know what our next antenna design will look like.”

When asked whether he knew of a potential flaw before the iPhone 4 shipped, Jobs became testy, “Are you talking about the Bloomberg article? That’s a crock, and we’ve challenged them to show proof of that. If anyone had said this thing has problems, we would have dispatched people to deal with that issue.”