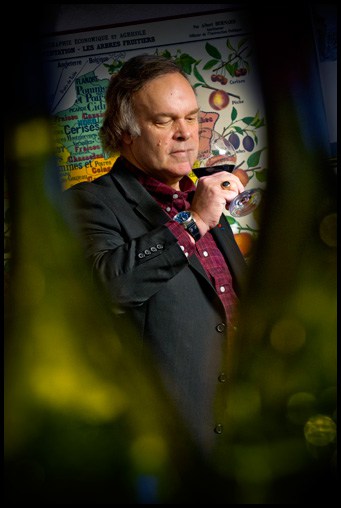 Few personalities are as polarizing to an industry as Robert Parker. He almost single-handedly created the 100-point wine scoring system as we know it today, and has helped indoctrinate the tasting note as part of our everyday lexicon. To others, especially the feisty lot (little puppy dogs?) known as wine bloggers, he is often reviled. Who dare suggest that one person should wield so much power and influence? It’s as if Parker was flying on a magic carpet, sprinkling pixie dust across vineyards. Of course, anything less than a 90-point score may very well be regarded as a lump of coal. Either way, Mount Olympus is a might fine place to be, gazing upon the minions of bloggers furiously typing away, attempting to be heard.

So I found it somewhat surprising that Mr. Parker himself would make an appearance on—gasp-by-tannins—a blog. Even more eye-opening is that the wine blog would be called 1WineDude, operated by the laid back, party-pleasing dude himself, Joe Roberts. By scoring an interview, Joe did what many thought was not possible: he created a temporary bridge between traditional wine journalism and new media. Better still, it’s a darn impressive interview. The kind that is fun to read, full of interesting tidbits. If I knew any better this might be the kind of one-on-one you’d read in Playboy, one of the gold standards (yes, really) for interviews (and short stories, for that matter).

Despite my occasional espresso buzz, I’m not beyond occasionally deciphering PR when I see it. And for the cynics in the room, yes, you could easily see this as a calculated move by Parker to assuage the Web 2.0-enabled crowd he sees constantly nipping at his ankles. By answering a few questions, he again keeps his name relevant, generates buzz, and fans flames at will by poking at Gary Vaynerchuck, for example. I was surprised that he appeared on 1WD as opposed to, say, the venerable Vinography run by Alder Yarrow, which Parker even cites as a “good” wine blog. But if you want to rock, then the Dude is it, at least in 2010. Parker showed well. Roberts showed well. It’s a fun tango.

However, I do take issue with Parker comparing himself to Michael Jordan (although to be fair, it was a leading question). What!? Only one person can do that, and his name is Wayne Gretzky (and was interviewed by Gary V himself on a positively entertaining episode of Wine Library TV). Also, aside: wine is not a sport.

Plus, if RP was truly the first wine blogger, then what about all those entries Charles Darwin made while aboard the Beagle? I’m sure he took tasting notes along the margins, next to all those evolutionary discoveries, no? It is possible to even be a “Blogger” before the concept, and technology existed?

On the topic of social media, Parker admits he was slow to adopt some of the new technologies such as Facebook and Twitter: “some of the criticism for this rather lethargic response is justified.”

After reading the interview, I came away impressed. Here’s a scrappy wine blogger—who’s made a name for himself thanks to daily writing, strong personality, and unique style—creating an interesting, original piece related to the wine industry. Stepping back you could see how this applies to other industries too, be it theater, auto or gadgets; the Blogosphere and new media sites continue to grow in influence and many are emerging as go-to sources for quality, entertaining content. Even if that name is 1WineDude. Go Joe!