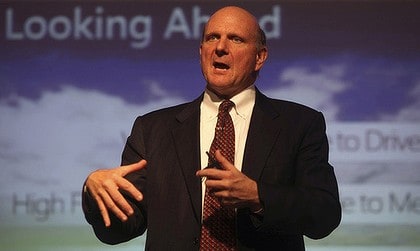 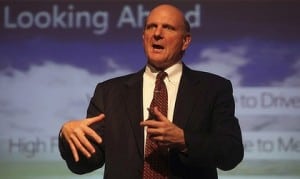 Steve Ballmer is not known to back down, put a lid on it, or just chill. But sometimes I wonder if any of those would be better than continually looking ridiculous (but admittedly entertaining) on the public stage. Yes, I realize Microsoft is the 800-pound gorilla when it comes to the world of PCs and operating systems. They still command over 90% market share. And, ultimately, despite the occasional monopolistic-like crushing behavior (witness Netscape), innovations out of Redmond have generally moved the industry forward.

But does that mean that its CEO needs to act like an 800-pound gorilla? Ballmer is one chest thump and banana toss away from being the world’s best infomercial pitchman. He’s got the hyper-aggressive, insane-o look down pat. And the sweat? Check, yes got that too.

Here’s his latest quote, about the Apple iPad, as reported by InformationWeek: “It’s just another PC.”

There’s partial truth there, of course. We live in an era of the operating system, but also now cloud computing. But that doesn’t mean we need to market or design products around the “click-and-drag” metaphor. While it has served us well, and will continue to do so for many day-to-day applications, we should applaud the companies seeking to change the game, and evolve how humans interact with technology.

Meantime I can’t help but wonder what kind of company Microsoft would be with someone a little more 21st century—just a tad less rhetoric, slightly less ego and better hair… calling Larry Ellison!