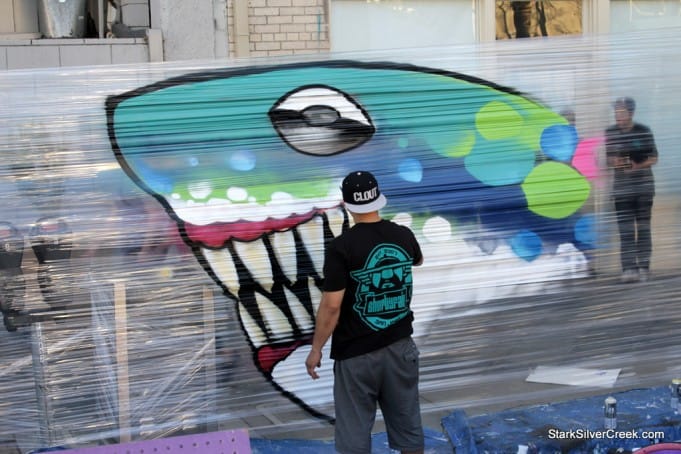 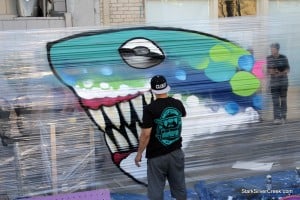 Last night the SoFA district of San Jose was once again the place to be, as crowds took to the streets for the annual SubZERO Festival. Although there is some question as to whether this is an annual or biennial event—last year we were told it would alternate with the larger ZER01 tech and arts conference—as far as I can tell the two are now operated independently. So we get both events this year. The winners are fans of live music, art, and, especially as was the case last night, general street funkiness.

With several streets closed off and a beautiful sunset glowing across the downtown skyline, we strolled up and down, talking with artists, taking photos and videos, and enjoying a fun-spirited evening.

You never know what to expect with these types of events. It can be a crap shoot. The quality depends on who and what shows up. While last year there were a number of larger-than-life techno works (e.g. low rider, swarming orbs, ChakraTron by Gaspo, and Andrew Hedges’ Big Chicken, which was spotted again), this year was humbler, at least from a jaw-dropping perspective. I wonder if many artists are waiting to showcase at the higher profile ZER01 conference in September?

I was impressed with the two-man band, The Ferocious Few; their raw energy had the place rocking earlier in the evening. Who knew that just two hyper-energetic guys could generate so much wild sound? I don’t think I understood a single word, or lyric. And it was great, especially with the majestic California Theatre’s marquee towering next to the stage.

Are We There Yet? The Wondrous Traveling Trailer by Genevieve Hastings was an oddity that amused with waves of people clamoring to check out the interior of the “moving piece of art.” It houses an interactive postcard station, several audio seats, suitcase sculptures with videos inside. Its purpose? Who knows, but people liked what they saw. Genevieve spent some time with Loni in the ultimate-cramped-SSC-on-location-video segment. More on that soon.

A special SPIRAL RIDE version of the San Jose Bike Party launched from the festival grounds.

As is custom on regular First Friday art walks, many galleries opened their doors and crowds streamed through, enjoying the exhibits. Beer and wine were plentiful.

The Looping Lounge was very much a David Lynch approved experience. Projection screens with blurred, distorted, digital imagery combined with live, on-stage performances including a violin and Rick Walker on a MacBook made for a groovy, psychedelic scene.

The Museum Proper was also on hand with a monster-sized puppet constructed and directed by Dax Tran-Caffee, and accompanied by a live musical score courtesy of Corpus Callosum and DeatHat. Loni interviewed curator Herbie Hatman, so check for that soon. And, yes, all these names are real…

All in all, another great festival, with more than just a hint (and whiff) of The Burning Man vibe.