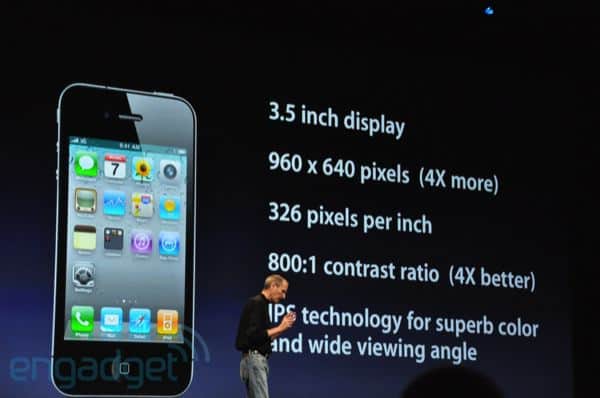 Steve Jobs presided over Apple’s World Wide Developer conference this morning here in San Francisco, wearing his trademark jeans and black turtleneck. At times he looked like a crazed and gangly magician, waving, grinning as the crowd oohed and awed. It’s an increasingly mystical annual sight, although a small stumble briefly brought things to a halt when a non-cooperative wi-fi connection prevented the demo from connecting to the New York Times web site.

While warm-up acts Netflix, Farmville, Guitar Hero were minor everyday sorts of news items, the real attraction, of course, was the new Apple iPhone—aka iPhone 4. Jobs reinforced that Apple is now the number two manufacturer in the US with 28% market share. “Over three times Android,” he stated.

This particular announcement carries additional drama, thanks to the sub-plot involving Gizmodo and the leaked next-gen iPhone found at a bar in Redmond City earlier this year. The investigation continues, but for now, most have already seen the new iPhone, or at least what we believed to be the device.

“Now, this is really hot. There are over 100 new features,” said Jobs, rolling up his sleeves with the eager crowd on the edge of their seats.

The design is indeed virtually identical to the leaked iPhone that Gizmodo reported. Jobs notes that its closest kin would be an old Leica camera. At only 8.3mm it’s 24% thinner than the iPhone 3GS. A glass screen along with glass on the back and stainless steel along the edges round out the industrial-retro design.

“Retina” is the name of the game when it comes to the iPhone 4’s sparkling 3.5-inch screen. Utilitizing 4 times the normal amount of pixels, it offers 326dpi and a resolution of 960×640, meaning characters and graphics really pop and afford smooth lines resulting in less eye strain. At 10-12 inches away, Jobs educated during the keynote, it’s impossible for the human eye (retina) to distinguish the pixels. Chalk one up for more clever Apple marketing. All of a sudden, those hot OLED displays seem so 2009. Jobs note that the iPhone has 75% of the pixels of an iPad. Holy early-adopter syndrome: time to upgrade the iPad already! “No one is going to come close.”

Smile! An all new camera system has been engineered into iPhone 4. With cameras on both the front and back, they now apparently “capture more photons.” In addition, low light sensitivity has been improved. More impressive perhaps is that the new iPhone will record 720p HD video at 30 frames per second. This type of feature could impact makers of dedicated portable camcorders such as the Flip by Cisco. Why carry two devices, when your new iPhone will do it all; especially since iMovie now allows on-the-go video editing and effects.

Apple has renamed their mobile operating system from iPhone OS to “iOS”  a move that emphasizes the decreasing role of the “phone” aspect of mobile devices, and the increasing importance of the “computing” aspect.

Other updates include an iBooks viewer app similar to the iPad, and a full-fledged PDF viewer.

iAds, Apple’s new advertising network, was also introduced to a subdued reaction among developers. Familiar to most already from previous announcements, its goal according to Jobs is to “help developers earn money.” Developers will get 60% of the revenue generated. The second half of the year will see some big names advertise on the network including AT&T, Chanel, GE, Nissan, Citi, Unilever, STate Farm, Liberty Mutual, Geico, Campbell’s Sears, JC Penney, Target, Best Buy, DirecTV, TBS, and Disney. Commitments total over $60M. iAds will start July 1, and according to Jobs will grab 48% of the mobile ad market in the second half of 2010.

Finally, FaceTime will enable real-time video chat from iPhone-to-iPhone with no setup or fees. AT&T is going to love this, let the bandwidth drain multiply! Initially it will only work on wi-fi, though, so network operators have a chance to beef up their capacity (and pricing plans).

Current customers that wish to upgrade have not been left out. The new iOS will be available free on June 21 for owners of the iPhone 3G, 3GS and Touch, although not all features will apply.