When I saw the title, The  Automobile: Past, Present and Future I knew it would be an easy decision when evaluating which presentation to attend next at the Stanford Leading Matters conference. While Loni disappeared down a hall at the Santa Clara Convention Center to a panel on innovation, I eagerly headed to the exhibit hall featuring a white Audi Quattro bearing the signature Cardinal “S.”

The one hour presentation wasn’t so much a soup-to-nuts prognostication of all things cars, as it was an entertaining cross-section of what researchers are working on deep within the Stanford labs. Plus, thrown in for good measure, we had an energetic archaeologist moderating.

Some sound bites astonished me. For example, “Even during peak, 92% of a highway remains unoccupied.” We learn that this inefficiency results from the infrastructure required to support modern roadways. Also, automotive deaths and injuries impact global GDP anywhere from 1-3% annually.

The stakes are no doubt high. So what would the panelists propose about the future of autos? And, I wondered: how long would it take before the conversation turned to the electric vehicle?

Turns out that latter question would not be explored until the session had almost ended. Thankfully! It was a breath of fresh air. Not because I don’t have interest in electric and hybrid cars, or believe they are a potential part of a larger environmental solution, I just wanted to hear something different for a change.

Each of three panelists was given about 5-10 minutes to present. Then the session concluded with an informative Q&A moderated by the Jeremy Clark-like archaeologist (of course!) Michael Shanks.

Sebastien Thrun presented first. A professor of computer science and electrical engineering at Stanford, he comes across equal parts German hipster (faded jeans, bemused smirk), and automotive fan of authentic proportions (German accent, love of robotics). His team won the DARPA Grand Challenge, an autonomous robot race that is regarded as a breakthrough in self-driving cars. Most of his presentation was focused on robotics. We see a computer-driven car doing donuts, utilizing a drift technique.

His catch phrase: “You can safely text, guilt-free.”

He shows us some videos with lots of cool-looking lab gear, and electronics. Robot intelligence, thanks to radar, advanced software and other technologies can do all sorts of things: making decisions at 4-way stops; parking; performing a left turn automatically on a busy road without any human intervention. The goal, though, is not complete automation, in the short-term at least. Instead, these technologies can be used in a variety of applications including guided tours in museums, elderly care, walking aids, discovering mine maps in abandoned maps. Plus, these same systems can be used to assist (but not replace) humans in everyday driving situations.

Thrun cautions the audience, taking a moment to take a more serious tone, “Cars are fun, but they’re inefficient. They are the leading cause of death for young people.”

He has mounted a Challenge: Cut traffic accidents in half, Cut number of cars in half, Double highway capacity, and Cut energy use in half.

And, of course, to Text twice as much while driving.

Clifford Nass is the John Nash of the group; he’s transfixed by mathemetics, research. To him, the world is gloriously quantitative. As much as Thrun was about the pithy observation or retort, Nass was about the analytics and survey. Survey says! It was a good contrast, and one of the reasons why this panel worked so well.

A Professor of Communications, Nass also directs the Communication between Humans and Interactive Media (CHIMe) Lab, which focuses on the communication in and between automobiles and other technological-based devices. His presentation focused on multi-tasking. How timely. With the amount of distractions on the road today (smartphones, iPods, GPS navigation… In-N-Out burger) you have to wonder if people have any neurons left to be able to drive safely.

One the most fascinating things he said: “When it comes to driving, it takes 10 years in learning before we see a plateau in skills.”

10 years! So your 16-year-old passes a driving test. He can drive, right? Well, yes and no. According to Nass’ research, it will take about 10 years for him to become a fully competent driver.

More interestingly is that one of the fastest growing segment of new driver is the elderly. Turns out it’s very common for the spouse who handles the driving duties dies. The survivor must then learn how to drive. And remember, Nass tells us, that it takes ten years for that new driver to come up to speed. Uh-oh.

And if you think teens are on the ball, then think again. On average they are experiencing between 4-5 “media streams” at any given time. So, he asks, what happens when people multi-task all the time? On the next few slides, he showed us results of research. Essentially some people can multi-task effectively, while others can’t. Some, for example, see the road as a very boring place and seek just about another stimuli to occupy their brains.

“For high multitaskers, the road is a boring place. They need to look everywhere else. Constantly distracted which doesn’t make for a safe road.”

Driving at the Limits 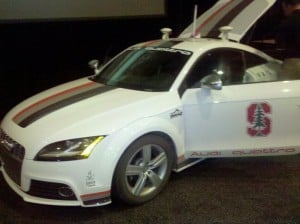 Here’s the theory. If we’re looking to improve driving skills and technology, thereby reducing accidents and injuries, why not start with the people that do it best: rally car drivers? They are constantly facing the unknown, like what’s up around the next corner. This is what Chris Gerdes, associate professor of mechanical engineering and director of the CEnter for Automotive Research at Stanford (CARS), suggests we do. Indeed, he seems like the perfect guy; his white Audi TT-S sits next to the stage, large Cardinal “S” emblazoned on the driver’s side door.

70% of people think they’re above average drivers he says to laughter. I wonder, does Loni?

Gerdes shows some more slick video, this time of a P-1 steer-by-wire car that he and his students built in 15 months. They wanted to know if they could program the car to drift. Then, another out-of-the-box idea: Can they send an autonomous car up the Salt Flats? They used a Pikes Peak TTS. “Shelley” they named it, in honor of the first female driver to win the uphill climb, Michèle Mouton. The Audi video that followed including an aerial shot of a TTS carving the Audi logo in the sands looked a bit like a car-lovers commercial. Indeed, Gerdes told us that they can’t be accused of not taking care of their research sponsors. Fair enough.

70% of people think they’re above average drivers … I wonder, does Loni?

His premise is that electronic systems can save lives. Statistics demonstrate they can reduced loss-of-control accidents by 29%, resulting in 8-12,000 lives per year. Therefore these systems, and intelligence algorithms designed, for example, to get a car up a steep, dangerous mountain automatically can be applied to daily stuff like lane assist (applying counter-steer), collision avoidance, etc. But, he says, “The record of humans interacting with systems is mixed…there is fear.”

Another interesting factoid: 92% of gas is used to move a vehicle and only 8% to move the passenger. Can we ever break the link between vehicle mass and safety (short of pushing your passenger out the door to the curb)?

…and Why is an Archeologist Moderating?

Before the Q&A, Michael Shanks explained why, as an archeologist, he was in fact a suitable moderator. It turns out this is the human element. Successful design requires an understanding of human culture, behavior. Just ask Apple.

“If you want to see how humans get on with things, get an archeologist,” says Shanks. “We must, we should respect the people’s culture of human, feeling… where we’ve come from that makes us who we are today, identity.”

Too often there is a mismatch between media design and customer design. An interesting example he introduces is that of product design cycles. Because consumer electronics release cycles are so much shorter than their more complicated automotive counterparts, the electronics in a car are often dated by the time a new model reaches the showroom floor. That’s why you see an old-school CD player, when you were hoping for an iPod connector.

Daimler Chrysler (back then) wanted to solve this problem, so they partnered with Stanford who set up a media lab, and began to research the issue.

During the Q&A one of the funniest comments again came from Sebastien. In the context of re-working liability systems, he noted that you can’t drive drunk, yet they had programmed their software that would drive them the following day over a bottle of red wine.

Auto vs. Airplane: Why the Flip?

Interestingly, control of  a car is almost sacrosanct in today’s society. Don’t touch my steering wheel! And, yet, in the aircraft sector, pilots are mandated to use auto-pilot, for example, when landing in bad weather at SFO. It’s flipped compared to the automotive industry.

Liability issues will need to be re-worked, especially as more automation as introduced into cars.

Do you drive for fun, or to get from point A-to-B? Personally, I love driving. Loni, not so much—she prefers sleeping in the passenger seat while I fight Bay Area traffic to get to San Francisco or Berkeley for an event to cover for SSC.

So here’s the question: If you had a button on your dash that would enable the car to take over in dense, rush hour traffic, would you push it? Show of hands, please. Almost everyone in the room raised their hands. People value fun, but not necessarily at all costs or all the time.

Fun vs. productivity? If you had a button on your car that you could press and have the car take over in dense, rush hour traffic, who would push it? Overwhelmingly majority.

Do cars that run on electricity solve the problem?

Perhaps. But it also shifts the problem. Now you need to worry about electricity generation. Attention shifts to the grid. We need to “clean” the grid. Balance the load by charging at night. If we can do that using wind, alternative sources than it might be net positive. The real drawback now is range, batteries have limited range. How will people respond to that?

We have more in this upcoming StarkSilverCreek series from Stanford’s Leading Matters conference, including the presentations, and also the dinner that took place later in the evening, presided by Stanford President, John L. Hennessy.