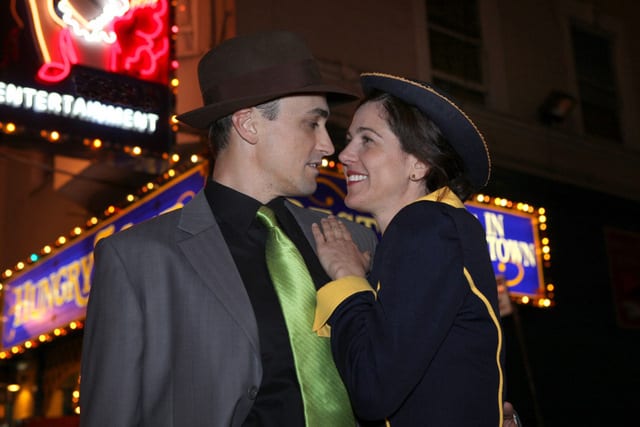 For a moment it felt like I was in one of those great outdoor amphitheatres in Greece. Or maybe it was Rome. But when I saw the sun shimmering across the Pacific Ocean through the majestic Redwood forest I knew this could only happen in one magical place on earth: the San Francisco Bay Area. Thanks to Mountain Play, you can enjoy first-rate outdoor theater with 3,500 of your closest friends. The setting is remarkable; breath-taking.

As I sat on the stone and grass seats (cushion tops are available) I marveled at the construction of the place. And how is it that such a natural amphitheater would come to be high atop Mt. Tamalpais? Those questions are for another day. Maybe we’ll even get to it in a photo essay or in the video we shot up there on Sunday. But this is all about Guys and Dolls, and an enjoyable afternoon of family entertainment.

A classic Broadway fable, Guys and Dolls marks its return to Mountain Play after last being seen here in 1995. A feel-good vibe throughout the musical ensures fun for everyone. There’s not a lot of mind-bending dialog here, or intricate story lines. Just simple, pure entertainment. The set is quite the sight. Large colorful signs (“Save a Soul”) and artwork line the backdrop which must be some 20-30 feet in height. And, what’s that?! A real-life yellow taxi just whisked past! With this kind of space, there is plenty of room even for a car. The clever set has revolving cut-outs in the façade that allow the stage to work in thirds for intimate scenes.

The cast works vigorously throughout, and the energy is contagious. You won’t be alone if you start bobbing up and down, enjoying the production.

The singing is strong. Voices are clear, and carry smoothly all the way across Mt. Tamalpais. I was initially surprised at the quality of the audio. Crystal clear! Later, I learned from executive director Sara Pearson that there is Grateful Dead pedigree on the sound engineering crew (Ian Dubois). Knowing something about outdoor concerts and sound is a definite plus here.

One of these days I’m going to be in the money!

Because of the distance between the stage and audience (this is definitely not SF Playhouse folks), the actors need to work twice as hard. Body language must be exaggerated. Even simple walking becomes becomes a wild exercise in extreme leg extensions and arm waving. It works. We feel connected to them, sinners and all. It helps too that the costumes are eye-popping hues of red, yellow and blue. Green pants and plaid suits are back!

The direction (James Dunn) is swift, and the action is always focused. Choreography (Rick Wallace) is fanciful. How can you resist the fun of the Cuban song and dance numbers? The orchestra (Musical Director Debra Chambliss) really adds pop, with catchy rhythms and horns that punctuate without over-powering.

This would be a great way to get children to drink milk!

Many will come just for the musical, but I expect most will come for an afternoon of family entertainment. Either way, you’re in for a good time. Make a picnic of it. Loni and I brought a small cooler with some sandwiches, beer (of course), Diet Coke, and snacks. Also there are plenty of on-site choices for food and beverage, conveniently nestled in the woods on a pathway to the box office.

This coffee is so good I can’t understand why it’s not a sin.

It takes a lot of people to pull off such a grand production. I counted about 60 production staff in the program guide. Then there’s the administrative staff, members of the California State Parks, and countless volunteers. Add in a cast of 40+ (including equity actors Randy Nazarian and Tyler McKenna)  and a 15-piece orchestra and you realize this is something special indeed. It takes a year of preparation, and a lot of “above & beyond” to make it happen, And remember, all of this work for a single annual show that runs just 5 weeks.

Odds are you’re going to come out of this show glowing, even if you don’t have your own “special” dice. Guys and Dolls is a fun show. But at Mountain Top—like the surroundings— it is magical. There are 5 more shows. Find out what kind of doll (or guy) you are and don’t miss it.