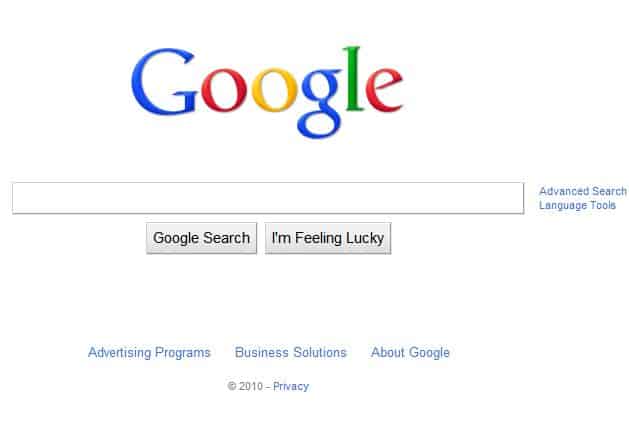 Has Google updated its famously iconic search interface? It would seem so, and I admit that this was not necessarily a discovery of my own making; several others have been jubilant in pointing out the minor changes to me almost as if they’d seen Woody Allen drifting in space.

Since it’s Google then it must  be news. Or at least of interest to those that follow its every move to save the world.

Somewhat deceptive that Google search screen. It looks simple. But as we all know it harnesses most of technology’s super power. Not really so innocent, despite their playful attempt with the 6 colored letters. This is definitely not a children’s playground.

Okay, about those changes then.

The shadow disappears into the night.

First, I can’t see the drop shadow underneath the GOOGLE letters anymore. It is gone, or at least its offset was significantly reduced to the point where you can’t tell there is a shadow. The result? The logo looks sharper, the lines cleaner. I like it.

Note that on a different laptop, using a different OS the logo still appeared unchanged. This could be part of a staggered roll-out that Google is so well known for doing.

I can feel you.

Next, the interface seems to be quite intuitive and sensitive. It can detect when I hover my mouse near the search box, and reveal other information (four links below: Advertising Programs, Business Solutions, About Google, Privacy).

Not sure why this is necessary but it is slick, and perhaps another muscle flexing moment by the Mountain View programming squadron.

The final change I noticed is that not only are the two search buttons (Google Search, I’m Feeling Lucky) enhanced visually, but they also now “float” as you type in the search box. Now even when there a vertical menu of predictive text, you still have access to the search buttons. Neat-o!?

Anyways, take this for what you will: One micro-obsessed Google user just sharing some inane observations with little rhyme or reason to understand their motivation for being. I’m sure there is more. And definitely there are more important things in the world to care about…