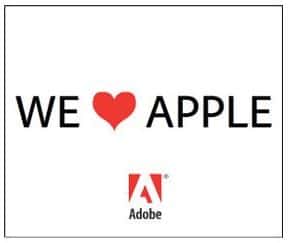 In the latest installment of the Flash controversy, Adobe has struck back with a new ad campaign that criticizes Apple for “taking away…freedom.” The news ads are in direct response to the open letter Steve Jobs published on the Apple Web site explaining why his company refuses to support Adobe’s flash technology on the iPhone. Flash enables most of the slick presentations and animations seen on various sites across the Web.

The new Adobe ad displays a message that they love Apple. But then flips over to say, “What we don’t love is anybody taking away your freedom to choose what you create, how you create it, and what you experience on the web.”

In addition to the ad, Adobe co-founders John Warnock and Chuck Geschke have now stepped into the fray with an open letter of their own now published on the Adobe web site.

Entitled “Our thoughts on open markets” and accompanied by a chummy black and white photo of the co-founders, it opens, “The genius of the Internet is its almost infinite openness to innovation. New hardware. New software. New applications. New ideas. They all get their chance.”

Openness, they believe, is what the Internet is all about. They recall Postscript and PDF, both technologies that we available across multiple platforms to anyone who wanted to use them.

The letter closes, “In the end, we believe the question is really this: Who controls the World Wide Web? And we believe the answer is: nobody — and everybody, but certainly not a single company.”

In other words: Steve Jobs, you might be a design genius, or madman, or both. But you don’t own the Internet.