Remember these names: O’Reilly and Boyle. They will soon be answers to some obscure NHL trivia game. Somewhat like Steve Smith was when he banked a shot off a team mate into his own net to lose a playoff series. Granted the stakes were higher, as I was reminded by a friend on Facebook, and it caused a gap in the Edmonton Oiler’s dynasty.

The good news, though, about last night’s shocking OT lose is that the San Jose Sharks are plenty alive.

They proved over 60 minutes that they can dominate in every single possible way. Meanwhile Craig Anderson proved he is a playoff caliber goalie. A stalemate that could only be broken based on yet another fluke goal in a series that is turning out to be wilder that any in recent memory.

Want to win the Stanley Cup? You better have a red hot goalie. Not just average, but stellar. Standing on his head, aggressively reading angles, attacking forwards from the crease—all prerequisites for a championship team. 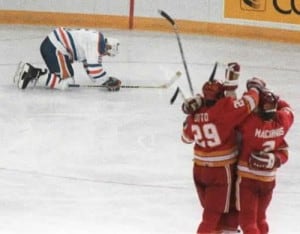 2. You can win an NHL playoff game with only 17 shots

Why bother wearing out your wrists and arms? Save them for another day. Colorado must know something here. Were they schooled in rope-a-dope?

3. Power forwards like Ryan Clowe are built for the playoffs

Time and time again Clowe dominated physically and offensively, usually both at the same time. By the end of the third period, his size along with Joe Thornton has worn down the Avalanche, that they were left flat footed watching Sharks circle around them.

The NHL is probably the only professional sport that has such a large gap between the quality of regular season play and the playoffs. The game is orders of magnitude better. Riveting, intense, exciting. By comparison all the games that come before seem like they were played by AAA players.

5. Prediction: Teams rally around embarrassed team mates, so will the SJ Sharks

I still think the Sharks will win this series. Last night’s fluke OT goal will serve as a rallying point. Team mates will come to Boyle’s defense. Most have been there before (albeit, probably not in a OT playoff game for heaven’s sakes) and commiserate. Expect a torrential first period Tuesday night in Denver as San Jose seeks to erase the memory. But, will Anderson do it again?