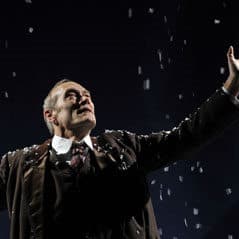 “He took money from the bank … he’s looking at establishing his own kingdom,” says actor James Carpenter. “He’s more than a bit mad. He’s spent five years in prison, and the next eight years upstairs in the attic. He doesn’t come down.”

No, this is not Bernie Madoff. It was just one of many intriguing moments captured on video when we sat down recently with James Carpenter to talk about acting, and his most recent role in Aurora Theatre’s John Gabriel Borkman. The production opens next week in Berkeley. But more on that in a moment.

I don’t normally get an overload of goose bumps when we meet actors and directors for interviews. All are exciting opportunities, and I’m just tickled anyone would want to sit down, or spend even more than a few minutes talking with us, patiently waiting as Loni works through some name pronunciation gymnastics during several takes (one of my favorite spectator sports).

But we’re talking about a Bay Area favorite, and absolute stalwart of stage: James Carpenter. I feel like I should call him Sir Carpenter. However, his father, a military colonel, didn’t always feel the same way.

“We had many long talks about it,” he recalls. “My dad would sometimes sit me down and say, ‘you know Jim you’re a really awful actor, you should really go into something else.'”

Fortunately, he would ultimately win him over. I don’t want to give away how, but it is truly one of those inspirational moments.

He’s charismatic, commanding on stage. Equally so off it, but in a softer way, even laid back, on this occasion battling a cold – all the better for that Creature-like voice.

There are several memorable Carpenter performances over the past twelve months alone. In As You Like It, he ratcheted up the melancholy and oozed swagger and mystery as he let down his hair in a striking scene on Rick Lombardo’s media-fueled, U2-like stage.

Trevor Allen’s The Creature astonished with a throwback to haunting radio play narrative. Story-telling in an intimate space has never been so effective as the interweaving journey sees a grotesquely sad James Carpenter travel across world, looking for love.

And over the holidays, the ACT in San Francisco once its annual A Christmas Carol with Carpenter as Scrooge. The physicality required—even dance moves!—demonstrates his range; not to mention his ability to charm at the flick of a switch.

When I found out the interview was a go, my mind raced. So many questions.

Is he a method actor? Is he really stone-cold serious off-stage, and could Loni possibly be in harm’s way? Are auditions still necessary? What about plays, does he too enjoy a night out? Will he be as towering in person? And if so, will this be another crazy tall-person, short-person shoot requiring special post production effects?

All said and done, we shot about 45 minutes of footage. I was fortunate to have one of the best seats in the house, behind the camera, soaking it in. It was a great, in-depth, honest and, in my view, wildly entertaining interview. Fans of theater, I hope you agree. We have more segments to come, but for now we wanted to focus mostly on Borkman.

Now, about John Gabriel Borkman. Talk about timely subject matter; impressive for a play written in 1896, then again perhaps it’s the corrupt financial circle of life. Referring to the lead character who pursues his dream of spreading human happiness, Carpenter says, “He’s really a Bernie Madoff.”

If we think capitalism gone amok is simply a late 21st century tale then Borkman reminds that corruption, and psychotic delusion, have a storied and far-reaching past.

“At what point does a vision go awry … cross a line … become a crime?”