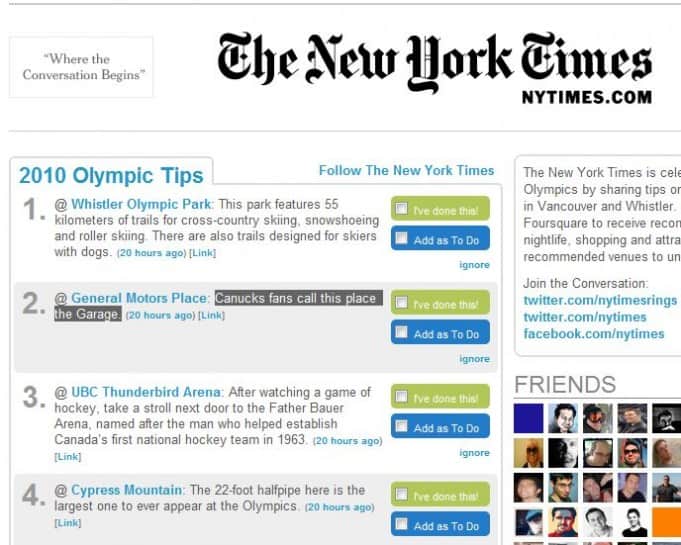 Well The New York Times didn’t exactly say that Foursquare would be a next generation travel guide, but after looking closer at today’s deal between the two, you may begin to see something significant happening. Travel guides, watch out—as if Yelp wasn’t enough of a pain in your side.

Foursquare users can now tap into New York Times content related to the 2010 Olympic Winter Games in Vancouver. Over 40 “tips” provide information, things-to-do and trivia about various venues and locations. For example, on Whistler Olympic Park: “This park features 55 kilometers of trails for cross-country skiing, snowshoeing and roller skiing. There are also trails designed for skiers with dogs.”

The entries include links back to The New York Times web site. Obviously the goal here is to drive traffic, loyalty.

The initial implementation is not exactly earth shattering. However, that one of the largest media brands in the world would partner with Foursquare gives yet another huge boost in an increasingly long parade of partners jumping into the location-based fray. Previous deals include Zagat, HBO, Warner Bros., Metro News in addition to others.

It’s another testament to the speed at which the new world of social networking and media can move. Over the past 6 months, Foursquare has gone from nothing to media mover-and-shaker. If you want to grab an audience, you need to go where the eyeballs are, as they say. And, increasingly, it’s on a mobile device. Capturing people in the moment, be it near a restaurant, store, or Olympic venue, is an interesting experiment in location-based advertising and promotion. Enter the new era of mobile loyalty marketing.